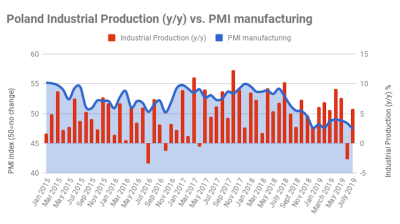 The July growth follows a decline in June – the first in three years – that was due to fewer working days and surging temperatures. The July data suggest “stable GDP growth in the third quarter,” according to ING.

Poland’s GDP growth came in at came in at 4.7% y/y (in adjusted and non-adjusted terms alike) in the first quarter and 4.4% y/y (4.1% y/y upon adjustment) in the second quarter.

The Polish economy is forecast to slow down expansion to around 4% in 2019 overall after rallying to 5.1% in 2018, the fastest in seven years.

Earlier predictions for a still slower expansion of about 3.5% – because of sluggish Germany and the reduced activity in the Eurozone in general – had to be revisited after the PiS government announced a multi-billion fiscal stimulus programme in late February.

In adjusted terms, industrial production grew 3.7% y/y in July, compared to 2.7% y/y in the sixth month.

Broken down by sector, output in manufacturing grew an unadjusted 6.6% y/y in July, compared to a fall of 3.4% y/y the preceding month. Production also grew in the water supply and waste management segment, where growth came in at 10.9% y/y in the seventh month, compared to an expansion of 2.3% y/y in June.