Poland’s PMI falls to a four-month low in June 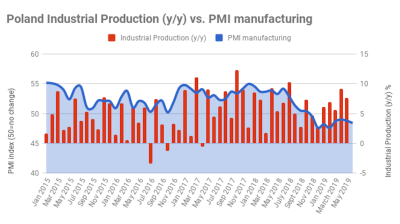 Poland’s PMI fell 0.4 points to 48.4 in June, remaining below the 50-point line separating contraction from growth for the seventh month straight, IHS Markit reported on July 1.

The indicator’s fall attests to the continuing deterioration of business conditions at Polish manufacturers, IHS Markit said. That is, however, refuted by the Polish industry’s performance early in 2019 with industrial output growth yet to fall below 5% y/y. In May, Poland’s industrial production growth slowed down to a still solid 7.7% y/y.

“Output and new orders both declined further, and at faster rates than in May. Exports and purchases of new inputs also contracted, albeit at slower rates. More positively, employment rose for the first time in five months and input costs increased at the slowest rate in over two-and-a-half years,” IHS Markit said

“Firms also reduced production in light of rising stock levels: inventories of finished goods increased for the fifth time in six months, and at the fastest rate in over 20 years,” the index’s compiler also said. Backlogs of work fell at the fastest rate since January, and one that was among the strongest in six years, it added.

The apparent weakness of the Polish industrial sector is yet to be confirmed by industrial production data for June, due later this month.

While there can be mismatches between individual readings of the PMI and the actual industrial production figures, the current consensus for the Polish economy forecasts an incremental deceleration of economic growth in Poland in the coming quarters.

Poland’s GDP surprised to the upside by growing 4.7% y/y in the first quarter in adjusted and non-adjusted terms alike, stats office GUS said in late May. Polish economic growth came in at 5.1% in 2018, the fastest since 2007.

Earlier predictions of a slowdown to around 3.5% this year have been corrected following the announcement of the government’s fiscal stimulus plan in late February.