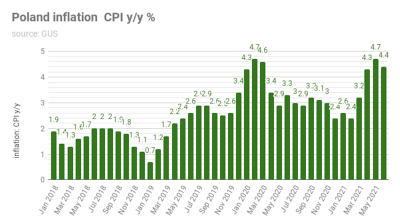 Polish CPI expanded 4.4% y/y in June, the growth easing 0.4pp versus the preceding month, the first drop in the annual expansion rate since February, statistical office GUS said on June 30.

The decrease is bigger than the market consensus, which expected 4.5% y/y. Still, inflation is set to remain elevated throughout 2021, analysts say. That will not prompt the Monetary Policy Board to action before late this year, however, until – if at all - it becomes clear that the economic recovery currently shaping up is sustainable.

“New projections of the National Bank of Poland – due next week – will most likely show a higher trajectory of both inflation and growth compared to the previous forecast. Despite that, we do not expect any material change in the monetary policy setup at next week’s meeting,” Erste said in a comment on the GUS release.

“We continue to think that NBP could deliver a 15bp hike in the fourth quarter or early in the first quarter of 2022 after the publication of the November [CPI and GDP] projection,” Erste also said.

The main inflation driver in June was the fast-rising prices of fuels, which surged off last year’s pandemic-induced low base due to growth in oil prices, GUS data indicated. Fuel prices ballooned 27.3% y/y in June, although decreasing versus growth of 33% y/y the preceding month.

Food and non-alcoholic drinks prices stepped up their growth rate, increasing 2% y/y in June after adding 1.7% y/y in May. Growth in energy prices remained at 4.4% y/y in the sixth month.

In monthly terms, the CPI inched up 0.1% in June, easing 0.2pp versus May, the flash estimate also showed. Prices of food and non-alcoholic drinks expanded 0.1% m/m, while prices of energy remained unchanged. Fuel prices expanded 0.9% m/m.

Prices of bread and flour products in Kosovo jump by up to 50%
12 hours ago
Bank lending in Georgia up 12.9% y/y at end-September
12 hours ago
National Bank of Ukraine leaves key policy rate unchanged at 8.5%
13 hours ago
Kazakh industrial output up 2.7% in first nine months
4 days ago
Slovak unemployment rate at 7.09% in September
4 days ago