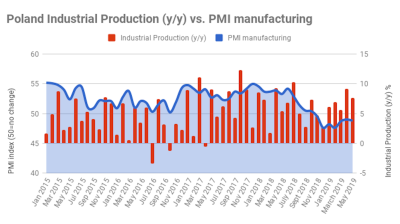 Polish industrial production grew by an unadjusted 7.7% y/y in May, data from statistical office GUS showed on June 21.

The headline figure is 1.5pp below the unadjusted figure recorded the preceding month although that still attests to the Polish industrial sector’s stubbornness to give in to negative trends in the external environment, especially the slowdown of activity in Germany, Poland’s biggest trade partner. That is a harbinger of a solid economic growth in the second quarter.

In adjusted terms, industrial production growth slowed down to still solid 5.1% y/y, 1.4pp below the adjusted annual expansion in April.

The somewhat surprising resilience of the industrial activity is also at odds with the weakened PMI, which fell slightly in May to remain below the 50-point line separating contraction from growth for a six consecutive month.

“In our view, positive calendar effect and market sentiment remaining favourable, as measured by local statistical office, supported growth [of industrial production in May],” the Austrian bank Erste said in a comment to the figures.

Broken down by sector, output in manufacturing grew an unadjusted 7.8% y/y in May, compared to 9.6% y/y in the fourth month. In the utility segment, production expanded 6.8% y/y after expanding 5.6% y/y the preceding month.

In the water supply and waste management segment, growth came in at 9.4% y/y in the fifth month, compared to 12.7% y/y in April.

Production also managed an expansion of 4.7% y/y in the mining and quarrying sector in May, after expanding 3.3% y/y the preceding month.

In monthly unadjusted terms, industrial production did not grow in May while inching up 0.2% m/m upon adjustment.

In January-April 2020 Belarus industrial output declined 3.8% year on year as the double whammy of the oil price collapse and the coronavirus stop-shock hit home.

In January-April 2020 Belarus industrial output declined 3.8% year-on-year as the double whammy of the oil price collapse and the coronavirus stop-shock hit home.

COVID-19 lockdown results in collapse of Lithuanian retail sales in April
1 day ago
Russian retail sales down by a quarter year on year in April, as unemployment soars
2 days ago
Ukraine’s real wage gains still positive but fall in dollar terms in March
2 days ago
Belarus industrial output declined 3.8% year on year in 4M20
4 days ago
Belarus industrial output declined 3.8% year-on-year in 4M20
4 days ago