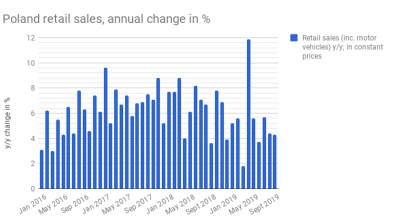 The reading marks a slowdown of 0.1pp in retail turnover growth in comparison to the y/y expansion recorded in August. The September growth is below market expectations, analysts note.

"Unexpectedly, the surprise was nearly solely related to the consumption of non-durable goods – the biggest drops were recorded in sales of food and in non-specialised stores," ING wrote in a comment on the GUS release. That suggests the weaker performance of the retail sector is only temporary, the Dutch bank said.

That said, the expansion in September is generally in line with Poles’ robust consumer spending that is driven by the good situation on the labour market, low unemployment and growing wages in particular.

The Law and Justice (PiS) government has recently expanded its flagship programme of monthly child benefit of PLN500 (€114) to encompass virtually all children in Poland. That has had an effect on consumption although PiS’ social spending did not translate into securing political domination in the October 13 election.

Driven by consumption, Poland’s GDP growth came in at 5.1% y/y in 2018, the fastest expansion in over a decade. The economy also expanded unadjusted 4.5% y/y (4.2% y/y upon adjustment) in the second quarter in a show of resilience amidst the worsening of the external environment.

All but two retail segments expanded y/y sales in constant prices in September, GUS data showed. Turnover in the furniture, audio and video equipment, and domestic appliances segment grew the fastest at 11.3% y/y.

Sales of pharmaceuticals, cosmetics, and orthopaedic equipment also rose fast at 10.9% y/y, as did sales of cars, motorcycles, and their parts, which increased 10.7% on the year in September.

In current prices, retail sales grew 5.3% y/y versus an expansion of 6% y/y in August. In monthly terms in current prices, there was a fall of 4% that followed a dip of 0.4% m/m the preceding month.

"The major question mark concerns the behaviour of consumers – in the previous quarter expenditure in tourism and services was remarkably high. However, statistics for both sectors are not published on a monthly basis. Therefore some positive surprises in consumption outlays are still plausible. That said, weak underlying trends in retail sales leave little space for private consumption acceleration in [the fourth quarter]," the Dutch bank added.

Russia’s Watcom Shopping Index has recovered three quarters of the ground lost during the coronacrisis, according to the latest data for week 26 of this year, after restrictions in Russia were eased in June.

Romania’s retail sales still 5.4% down y/y in May

Sales lag below 2019 level despite bouncing back in May from their plunge in April.

Estonia’s industrial production remains depressed by COVID-19 in May

May marked the twelfth consecutive month of falling industrial output in the Baltic state. The coronavirus (COVID-19) pandemic has clearly been the chief driver of the decline since March.