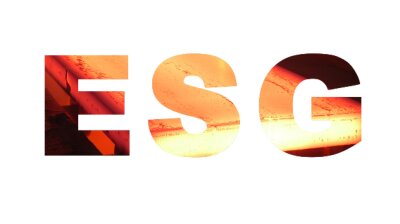 The first ESG ranking of Russian iron and steel companies showcases fairly high results in terms of the quality of corporate governance, while the average scores for social and environmental factors are noticeably lower. This is especially relevant for such factors as climate change adaptation and co-operation with suppliers.

The global climate agenda is becoming more acute and the climate goals are becoming more ambitious. Industrial and financial companies around the globe have announced their plans to become carbon neutral. Investors, represented by pension funds, large insurance companies and portfolio managers are tightening their approaches regarding the selection of investment targets. Additional incentives are also being created at the level of governments and associations. Amongst the latter, the mechanism for cross-border carbon regulation, proposed by the EU, has triggered an especially active discussion. Essentially, being a tax on imported products based on their carbon intensity, the mechanism is designed to prevent the so-called "carbon leakage" and to help the EU achieve its climate goals. In our opinion, it is exactly the sort of cross-border carbon regulation that is going to become the main “transit” climate risk for Russian iron and steel companies, whose products are in high demand in Europe. According to various estimates, the amount of carbon tax for Russian manufacturers of semi-finished, rolled and finished products could reach €250-450mn annually. This will most likely be an additional reason for Russian metallurgists to start paying special attention to both low-carbon development projects and environmental, social and governance (ESG) risks in general.

We released our first ESG ranking of the largest Russian companies back in 2018. In the ranking, we assess the relevant ESG risks for companies and the mitigation of respective risks. Over the past year, our methodology for the assessment of companies has changed significantly: the number of analysed indicators has risen to more than 200 (see Box 1), and we have begun to take controversial situations and incidents (controversies) into consideration. Besides, we have established the process of interaction with companies through questionnaires and the verification of preliminary results in order to improve the quality of the assigned ratings. The expansion of the analytical base and the increase in the number of companies in the ranking allowed us to analyse the industry specifics in more detail as well as to start issuing industry rankings.

The ranking of iron and steel companies presented in this article is the result of the analysis of ten largest Russian companies of the industry by revenue in 2019 (see Box 2). We have updated our ranking on a monthly basis, so it reflects occasional changes in the policies and procedures of the assessed companies, as well as the results of controversies monitoring. The plan is to expand the ranking further, as well as to update it, as the companies release their non-financial reports for 2020.

NLMK became the leader of our ranking (see Table 1), and made it into the top ten of our integrated ESG ranking of Russian companies, taking 4th place in the social category. NLMK demonstrates a high level of non-financial information disclosure in all the three areas of ESG. Moreover, the company has managed to significantly reduce specific and absolute figures of energy and water consumption in recent years. NLMK has also succeeded in meeting its ambitious workplace injuries targets: the company's LTIFR has declined by 56% since 2013. Also worth mentioning is the composition of NLMK's board of directors (BoD), where more than half of the directors are independent.

The reporting of Severstal, which is ranked second, also demonstrates a high level of transparency. The company pays significant attention to reducing environmental pollution and corporate social responsibility issues. Furthermore, Severstal received the highest industry score in the “Human Capital” category, which is based on the assessment of labour practices, occupational health and safety, recruitment practices and inclusivity.

The Magnitogorsk Iron and Steel Works (MMK) rounds out the top three: the company has earned a high assessment of its business ethics practices and structure of the BoD.

Due to the fact that the majority of the companies analysed are industry leaders, the distribution of companies by rating class is skewed towards higher scores. NLMK and Severstal are in the rating class, three companies are in the BBB class, two in the BB class, one company in the B, CCC and C classes (medium and low ratings) (see Chart 1).

Distribution of iron and steel companies by ESG rating 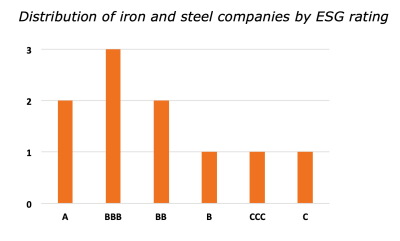 The most problematic ESG factors with the lowest average scores include co-operation with suppliers on environmental and social issues, adaptation to climate change and renewable energy.

If we talk about individual quantitative indicators, the intra-industry comparison is hampered, first of all, by the different level of disclosure of non-financial information in the sample. For example, a high-quality time series for workplace injuries can be extracted from the reports of only five companies (NLMK, Severstal, Evraz, Metalloinvest and OMK): the average LTIFR for the sample was down by about 20% from 2015 to 2019. However, this figure is still 30% above the global industry average (calculated by the World Steel Association based on the data from 104 steel companies) (see Chart 2).

Secondly, the comparison is made more difficult due to the differences of the companies in the sample, largely related to the presence or absence of a mining division. Nevertheless, based on the data of five companies from our sample, we observe positive industry dynamics for specific air emissions (see Chart 3) and direct greenhouse gas (GHG) emissions (Scope 1, see Chart 4). It is important to note that the level of disclosure of indirect GHG emissions (Scope 2) among Russian iron and steel companies remains extremely low. 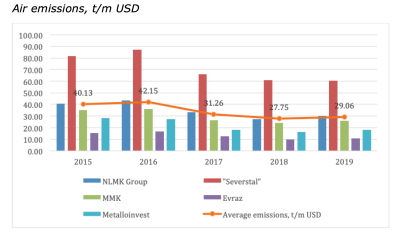 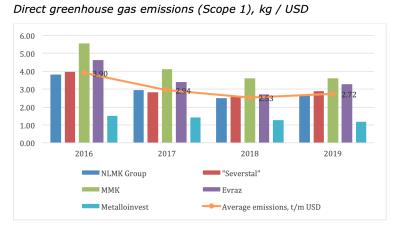 We anticipate that in the future Russian iron and steel companies will improve the transparency of their non-financial indicators and as such will reduce the negative impact of their operations on the environment. The industry has significant decarburisation potential. Decisive and timely steps in this direction can reduce transit risks associated with European regulation and become a competitive advantage for the industry.

A company's position in the Ranking is based on the score (from 0 to 100) obtained as a part of the ESG rating assignment. Companies are ranked from those with the highest score ("leaders") to those with the lowest score ("outsiders"). The final score is a weighted average of the three components - E, S, and G sections. Each section includes two to four blocks, with weights set according to the industry. Figure 5 depicts the block weights for the iron and steel industry. In turn, each block consists of several thematic factors, in which analysts assess the presence of policies and guidelines in the company (for example, a policy to reduce climate risks), reporting (for example, the presence of annual CO2 emissions disclosure), as well as the company's performance. In total, the current methodology uses over 200 quantitative and qualitative indicators and provides companies with an opportunity to comment on the preliminary results of the assessment and to send us additional information for the assessment. The full version of the methodology is available on the RAEX-Europe website.

Distribution of weights of ESG factors for iron and steel companies

By analogy with credit ratings, all companies, depending on the score received, fall into one of the rating classes - from AAA (maximum) to C (minimum).

The Russian ruble has been through some wild swings this year as it has almost completely decoupled from the price of oil and is almost entirely dependent on the ebbs and flows of geopolitical tension.