Rift opens within Serbian government over position on Russia 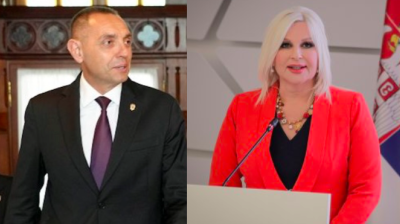 The Serbian government has refused since February to join Western sanctions on Russia, despite coming under pressure to fall into line with EU sanctions policy as a candidate country.

"Serbia has clearly decided against the war in Ukraine, and by the fact that we did not impose sanctions on Russia, as the whole of Europe did, it shows that it leads an independent and independent policy,” Mihajlović said in a statement widely carried by the Serbian media.

“Instead of respecting our decision not to impose sanctions, despite the pressures we are facing, [Russian Foreign Minister Sergei] Lavrov is abusing that fact by presenting it as our support for the Russian side in the conflict, thereby putting additional pressure on President Aleksandar Vucic and the government of Serbia. Although he talks about the friendship between the two countries, with this kind of behavior he shows the opposite in practice," Mihajlović added.

The minister stressed that Belgrade “conducts an independent and independent policy exclusively in the interest of its citizens”.

"The policies of the government and the president are the preservation of peace and stability, regional cooperation and accession to the EU," said Mihajlović.

Mihajlović issued the statement after Serbian Interior Minister Aleksandar Vulin paid a two-day visit to Moscow on August 22-23, during which he met Lavrov and other Russian officials.

During the meeting with Lavrov on August 22, Vulin, who is a pro-Russian politician, said that Serbia is the only country in Europe that has not “become part of the anti-Russian hysteria”.

The visit took place at a time of elevated tensions between Belgrade and Pristina, and Vulin also expressed gratitude to Russia for not recognising Kosovo and consistently respecting the territorial integrity of Serbia.

Vulin responded to Mihajlović, saying the Russian foreign minister "does not force Serbia to do anything, he highly values ​​our neutrality and understands our position regarding the conflict in Ukraine and respecting international law and has never tried to direct or change our policy”.

Recently, the Russian ambassador to Belgrade Alexander Botsan-Kharchenko was cited by Russia’s SM News as saying that opening a Russian military base in Serbia is of interest of Moscow. However, Vucic responded that Serbia "does not need anyone's military bases".

“[Serbia] is not shy about ties with Russia, China, the US and the EU, but it will take care of itself,” Vucic told TV Prva.

Vucic has consistently made it clear that he will continue with the increasingly difficult job of balancing relations between Russia and the West.

Vucic’s multi-vector foreign policy, under which Serbia seeks good relations with the EU, the US, Russia and China, served it well until 2022, allowing it to pursue the goal of EU accession while at the same time benefitting from Chinese infrastructure and industry investment, as well as from Russian political support in keeping Kosovo out of the UN and other international organisations.

It is Russia’s support over the Kosovo issue, and the overwhelming public sentiment this creates in favour of Russia, that is the prime factor in keeping Serbia locked into Moscow’s orbit.

A June poll from Demostat showed overwhelming support for Russia and opposition to joining Western sanctions among the Serbian population. According to the poll, 80% of respondents opposed sanctions on Russia, to only 9% in favour. The same poll showed waning support for EU accession, while Russian President Vladimir Putin was the most popular world leader among respondents.

The public spat between Vulin and Mihajlović broke out as Vucic is preparing to announce Serbia’s new cabinet within the next two days. Serbians have been waiting since the April general election for the new government to be announced after voting was repeated several times at one polling station.