Romania’s reformist USR-PLUS ready to overthrow its own government 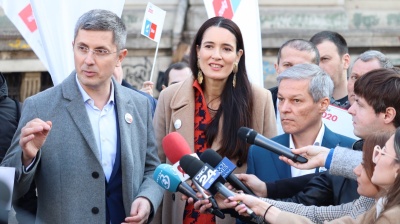 Romanian reformist party USR-PLUS will submit a no-confidence motion against the government headed by Prime Minister Florin Citu by the evening of September 6 — despite being a member of that government, announced co-president of USR-PLUS, Dan Barna.

USR-PLUS announced on September 1 that it is withdrawing its support for Citu, whom it accused of plans to “rob public money” through the RON50bn (€10bn) public investments plan. The party is ready to keep the existing coalition led by the National Liberal Party (PNL) intact, but wants to replace Citu as prime minister.

USR-PLUS will submit the no-confidence motion together with the radical rightwing Alliance for the Union of Romanians (AUR), he confirmed.

However, the talks with AUR are at a very early stage and the decision to submit the no-confidence motion depends on a final endorsement expected from the USR-PLUS leadership on Sunday.

However, if the USR-PLUS manage to submit a no-confidence motion together with AUR (still an iffy scenario, despite Barna's statement), all the MPs from the biggest parliamentary party, the Social Democratic Party (PSD), will back it, PSD leader Marcel Ciolacu promised.

If the no-confidence motion fails, the ministers that are members of USR-PLUS will resign, said Barna.

USR-PLUS, which has withdrawn support for Citu, has discussed with all the political parties potential joint no-confidence motions against the government, announced the head of the party’s caucus Ionut Mosteanu.

He stressed his party has, together AUR, enough MPs in parliament to initiate the no-confidence motion. It is an option seen by many to bear heavy political costs for reformist USR-PLUS as it would disappoint many of its supporters.

At the same time, Mosteanu left the door open for an amicable solution among the members of the PNL/USR-PLUS/UDMR ruling coalition saying that his party called a coalition meeting for September 3. The meeting will take place after the government meeting where Citu plans to endorse the controversial €10bn public investment project that created the political scandal.

Mosteanu said that “unless PM Citu resigns, we will overthrow him, just like we made him prime minister.”

Such an ‘amicable’ option among the members of the ruling coalition turned, however, rather unlikely after the PNL leadership expressed firm support for Citu, after being summoned for a meeting on the morning of September 2

At the same time, the opposition PSD published the text of a motion against the government and invited USR-PLUS as well as AUR to support it.

It seems to be another dead-end, however, as the motion condemns the performance of all the members in the ruling coalition — including USR-PLUS.

Summing up, despite the multiple no-confidence motions prepared against Citu’s cabinet, the prime minister holds high odds to survive and regain the formal support of USR-PLUS. The mediation of President Klaus Iohannis is likely to contribute to this.

The alternative is a prolonged political crisis at the time when the country’s medium-term economic policies including the Resilience Plan (PNRR) and fiscal consolidation plan need to be drawn up.