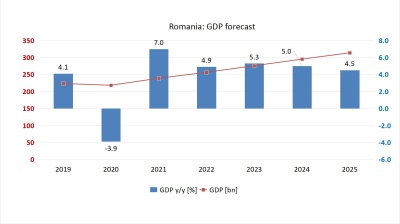 Romania’s state forecasting body CNP, operating under the supervision of the government, revised the GDP growth projection for this year to 7%, from 5% envisaged in April and 4.3% in February.

The CNP’s forecast is rather cautious compared to the double-digit growth rate mentioned by Prime Minister Florin Citu recently as possible for this year.

The average exchange rate this year is seen at RON4.92 to the euro, a forecast that was not revised compared to April, despite the shift toward weaker currency revealed by the polls among CFA analysts.

The institution still counts on a robust 14.1% advance in the value added generated by agriculture and 6.1% increase in the sector of construction.

Separately, the net taxes would contribute more, thanks to a 7.1% annual increase (versus 5.1% estimated in April).

On the utilisation side, both the domestic demand (for consumption and investments) and the external demand are revised upward.

Thus, consumption (accounting for the biggest share of the GDP utilisation) will increase by 6.6% versus 4.3% projected in April, and lower than the overall GDP production.

The stronger domestic demand for consumption (which remains the main driver for growth, despite the faster advance of the investments), may be explained to a small extent by the stronger rise in the real wages (+2.9% y/y compared to 2.0% envisaged in April), but more by the stronger consequent consumer confidence.