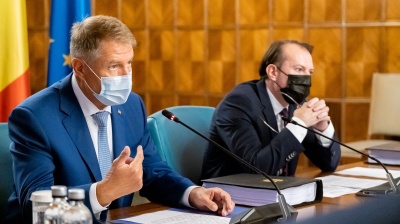 By Iulian Ernst in Bucharest September 26, 2021

Romanian Prime Minister Florin Citu became the president of the National Liberal Party (PNL) after defeating the incumbent head of the party, Ludovic Orban, on September 25.

The government headed by Citu has minority support in parliament and is under attack by its former ally, reformist USR-PLUS, which has accused the Liberal leader of autocracy and is seeking to oust him with a no-confidence vote. Citu’s defeat of Orban makes the restoration of a centre-right majority in parliament less likely as USR-PLUS representatives have repeatedly said that they will never accept Citu as prime minister again. This complicates the resumption of negotiations that are the only sustainable way out of the political crisis.

Citu received 60% of the votes after a heated party congress that brought together 5,000 delegates from local PNL organisations. Orban was supported by only 40% of the delegates and announced that he is going to resign from the position of Chamber of Deputies speaker.

“Thanks to all my colleagues! Today's victory is the liberals! As of tonight, we are a united party,” announced Citu on Facebook after the result came in. “We fight against [the Social Democratic Party] PSD, we fight for Romania! Today we celebrate, tomorrow's back to work! [The National Recovery and Resilience Plan] PNRR will be signed on Monday, we will stick to the government programme, we won't change a single comma. In the end, the victory must and will be for the Romanians!”

But it’s not over yet — the next ten days will be critical for Romania. The leadership election was only the first of three events that will have a major impact on further political development.

The first of the other two key events will take place on September 28, when the Constitutional Court will rule on the no-confidence motion filed by USR-PLUS against the government. If cleared, the motion could overthrow the government within five days.

Separately, on October 2, USR-PLUS will hold internal elections. The outcome of the ballot is not particularly important for the overall picture (both candidates share roughly the same views as regards collaboration with the PNL), but it will unblock the negotiations between the former political partners on the formation of a majority.

Possible outcomes range from the restoration of a centre-right majority ruling coalition to early elections. Given Citu’s win, a minority government with ad-hoc support in parliament is probably the most likely outcome in the short term.

Another result of the PNL leadership election is that Citu winning the top seat puts President Klaus Iohannis into a stronger position three years before the end of his second term.

Iohannis openly supported Citu in the leadership race, leading some observers to say it was actually Iohannis who got (re)elected as PNL leader (he has headed the party in 2014 before being elected president) on September 25. Iohannis now has the PNL, and indirectly the government, under his full control, which is why he intends to keep the party in office at any price.

Having only entered politics in 2016, after his career as a banker was ruined when he was fired by ING Romania, Citu was brought into the PNL by Lucian Isar (the husband of the Liberal leader Alina Gorghiu), another banker involved in the speculative attack against the local currency in 2008. Entering politics was another speculative move and a high propensity for risk has shaped Citu's political career.

This started to take off in 2020, when he was nominated as a prime minister candidate by Iohannis as part of a strategy aimed at triggering early elections. Less than one year later he was nominated as prime minister after the Liberals ended the general elections with a disappointing score under Orban’s leadership. He was at that time regarded as promoting neo-liberal policies, and gained the favour of rating agencies and the central bank. Ironically, he is now preparing to implement (at a national level) the biggest centralised economic development plan Europe has witnessed since the Marshall Plan.

Citu’s victory got a scathing reception in some quarters. “Another historic party died today,” Mihai Sora (105), one of the informal leaders of the anticorruption street protests in early 2017, said on Facebook. He admitted Orban has good and bad sides — while depicting Citu as a politician invented overnight “with obvious authoritarian outbursts and emotional imbalances, devoid of political culture”.

This view backs up that expressed by Citu’s former boss at ING Romania, Misu Negritoiu. “A little satrap, very old-fashioned, doesn't know how to work in a team," Negritoiu said earlier this month as reported by G4 Media.

Despite this, Citu was chosen by President Iohannis for his plans to modernise Romania. The president’s plan is to rebuild the centre-right coalition with Citu as a loyal lieutenant charged with implementing what he has repeatedly called the €80bn plan for Romania — and claimed credit for.

“I managed to obtain for Romania a budget package of about €80bn for the next nine years. These funds represent a historic opportunity to develop Romania in the medium and long term. I have worked with the Liberal government throughout this period to ensure that Romania will be prepared to access in advance the facility for recovery and resilience, a unique financial instrument in the history of the European Union so far," Iohannis said last November, when launching the first draft of Romania’s Resilience Plan.

In fact, it was USR-PLUS minister Cristian Ghinea who managed to have a plan drafted that eventually got approved by the European Commission, after the first draft inked by Iohannis' Liberals was scrapped.

While it has enough financial support, the plan needs the political support of USR-PLUS both for a majority in parliament and for broader popular support. In public, Citu has argued that he is sure lawmakers will support his government as it pursues good policies for the people. But in the real world some tough decision have to be made. Citu is supposed to deliver Romania’s medium-term fiscal consolidation strategy to the European Commission by October 15. Energy prices will surge this winter and the central bank cannot accommodate wide budget deficits indefinitely — eventually, interest rates will have to rise. Romania is in the midst of a new wave of the coronavirus (COVID-19) pandemic.

Without the support of USR-PLUS, the Liberals may attempt to keep working based on a minority government, possibly with the discreet backing of the opposition Social Democrats. But endorsement from USR-PLUS would lend credibility to the PNL, which is still perceived as a traditional party, unable to reform itself or pursue deep reforms. Negotiations on a new formation will begin after the reformists elect their leader on October 2 and the Liberals can be expected to use the toughest possible strategies to strike a deal with their former partners.