Russia-China trade up by a third this year, on course for $200bn 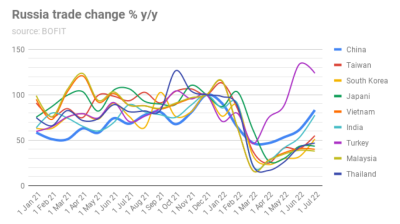 Russo-Chinese trade was up by nearly a third in the first eight months of this year to $117bn and Putin says the pair are on course to achieve the long-established goal of $200bn of turnover. / bne IntelliNews
By bne IntelliNews September 7, 2022

Russo-Chinese trade turnover was up by 31.4% in the first eight months of this year to $117bn and is on course to hit $200bn, the General Administration of Customs (GAC) of China reported on September 7.

Total trade turnover hit a new record of $146.9bn in 2021 as both sides have striven to reach the goal of increasing trade to $200bn set several years ago.

China’s exports to Russia rose by 8.5% in the reporting period to $44.26bn, while imports of Russian goods and services climbed by 50.7% to $72.95bn, according to released data, reported Tass.

Russia and China can soon reach the $200bn level in mutual trade, President Vladimir Putin said at the meeting with Chairman of the Standing Committee of the Chinese National People's Congress Li Zhanshu at the Eastern Economic Forum in Vladivostok.

"The trade turnover is growing. It increased significantly by 36% last year and reached as much as $140bn. It continues growing; it gained 30% more during the first six months of the year," Putin said. "To all appearance, we will indeed reach $200bn soon as we desired," the Russian leader added.

However, there have been problems with trade this year after the Russian invasion of Ukraine and imports from China have fallen heavily, while exports to China remain strong. Investments by China into Russia have also stopped since the war began.

China is wary of getting too close to Russia, as its biggest export market remains the EU and US, thus exposing it to sanctions risk. However, Russia has few other large markets to turn to.