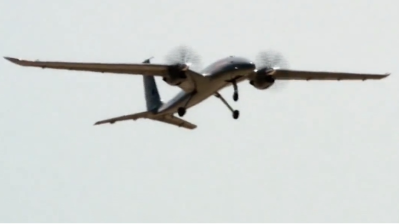 Turkish-made armed drones are playing a big role in the conflict and are a key part of Ankara's attempt to project itself as a regional power.
By bne IntelIiNews October 15, 2020

Russian Foreign Minister Sergey Lavrov on October 14 criticised Turkey for pushing the line that a military solution to the Nagorno-Karabakh conflict is acceptable.

“We do not agree with the position voiced by Turkey, that was also expressed several times by [Azerbaijani] President [Ilham] Aliyev,” Lavrov said in an interview with local radio stations, as relayed by Reuters. “It is not a secret that we cannot agree with a statement that a military solution to the conflict is permissible,” he added.

Lavrov also stated that it would be right to deploy Russian military observers on the line of contact in Nagorno-Karabakh, but that it was up to the adversaries Azerbaijan and Armenia to decide.

Armenia has accused Azerbaijan of surrendering its foreign policy making to the hard power diplomacy of close ally Ankara, and has said that it appears that there can be no breakthrough in achieving a cessation of hostilities until Turkey—which it says is using the conflict in trying to project itself as a growing regional power and is an “expansionist” danger to the wider South Caucasus, southern Europe, Syria, Libya and Iraq—permits it. “The whole of the South Caucasus will become Syria and that fire would spread to the north and to the south rapidly,” Armenian Prime Minister Nikol Pashinian said in an October 13 interview with Reuters.

Since it came into force on October 10, a Russian-brokered humanitarian truce has almost entirely broken down, with ethnic Armenian and Azerbaijani forces accusing each other of multiple violations and attacks on civilians. October 14 also saw Azerbaijan confirm it had struck a missile-launch site in Armenia. Baku claimed it was being used to target civilian areas in Azerbaijan. The confirmation marked the first time in the fighting, which broke out on September 27, that Azerbaijan has acknowledged hitting targets inside Armenian territory.

“By the same logic”

Confirming the Azerbaijani strike on the Armenian missile site, Armenian Defence Ministry spokeswoman Shushan Stepanian said that "by the same logic, the [Armenian armed forces] henceforth preserve the right to target any military installations and combat movements in Azerbaijani territory".

Azerbaijan is pushing to get Turkey a seat at the table for any substantive peace talks, with Aliyev saying the conflict cannot be solved without Ankara’s involvement. Russia is yet to show any sign of agreeing to this change in the talks format, but the day also saw Russian President Vladimir Putin call for cooperation between leaders to end the fighting in a telephone call with Turkish President Recep Tayyip Erdogan.

In the call, the two presidents "stressed the urgent need for joint efforts to end the bloodshed as soon as possible and move to a peaceful settlement of the Nagorno-Karabakh problem," according to a Kremlin readout. The call was the first between the two leaders since the fighting erupted.

Pashinian on October 14 called the situation "very difficult" and said Azerbaijan's intention was to take control of Nagorno-Karabakh—an internationally unrecognised self-proclaimed republic controlled by ethnic Armenians for three decades—completely. Azerbaijan and Turkey, he said, did not want "to stop their aggression".

Turkish Foreign Minister Mevlut Cavusoglu said on October 13: “We find international calls for a ceasefire reasonable. But we can only see the international community’s wish to solve this issue if there is a call for Armenia to withdraw from Azerbaijani lands as well.”

Aliyev accused Armenia of "trying to attack and take control of our pipelines." Speaking to a Turkish news outlet, he warned that if the effort continued "I can say that the outcome will be severe for them."

Armenia has denied trying to attack the pipelines.

The extension of the fighting into Armenian territory is worrisome in that it could invoke defence obligations under the Collective Security Treaty Organization (CSTO), of which Armenia is a member along with Russia, Belarus, Tajikistan and Turkic-speaking nations Kazakhstan and Kyrgyzstan. According to Article 4 of the CSTO treaty, “[in] case of aggression commission (an armed attack menacing safety, stability, territorial integrity, and sovereignty) to any of the member states, all the other member states at request of this member state shall immediately provide the latter with the necessary help, including military one”. However, Putin has said Nagorno-Karabakh is not covered by the CSTO.

Russia has a military base in Armenia but it also has close and long-established ties with Azerbaijan.

In a statement on October 14, the International Crisis Group warned all actors involved in the conflict about the need to prevent civilian casualties. "It is critical that both sides cease targeting civilians and undertake efforts to prevent and alleviate humanitarian suffering," the statement said. The International Committee of the Red Cross put out an October 13 statement, urging Armenia and Azerbaijan to finalise arrangements for it to handle an exchange of detainees and bodies from the Nagorno-Karabakh conflict, in line with the humanitarian ceasefire agreed at the weekend.

There has been mounting evidence—including funerals of deceased fighters in Syria documented by media outlets—that Turkey has been deploying mercenary Syrian fighters to the conflict, though Ankara has repeatedly denied it. Armenian President Armen Sarkisian has, meanwhile, suggested that Armenians "from all over the world" might be among those fighting on the Armenian side.

Erdogan on October 14 accused the co-chairs of the OSCE Minsk Group that has been supervising mostly dormant peace talks for over a decade of dragging its feet. "The United States, Russia, and France are still putting this off with their stalling tactics," Erdogan told Turkish lawmakers. "Just give them [the Azerbaijanis] the occupied lands. Let them do what they want in their own lands.

"What you need to do is finish your negotiations and hand over the lands to their owners," Erdogan said.

The US Democratic presidential candidate Joe Biden on October 14 expressed deep concern over the collapse of the Nagorno-Karabakh ceasefire and accused the Trump administration of being “largely passive and disengaged”.

“Rather than delegating the diplomacy to Moscow, the administration must get more involved, at the highest levels,” Biden said in a statement.