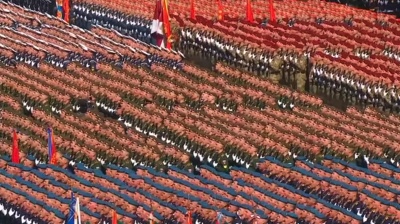 The Russian government has talked of increasing the size of its army to 1.5mn and there are a growing number of signs that it is preparing for a mass mobilisation in the spring. / bne IntelliNews
By Ben Aris in Berlin January 24, 2023

The Russian government appears to be preparing for a second wave of mass mobilisation with a series of changes to the laws to increase the pool of eligible candidates for conscription by a third. The changes point to a new mass mobilisation in the spring ahead of a major counter-offensive widely anticipated by military analysts.

The government in Kyiv has been warning that the Kremlin could close the borders and call up nearly a million men in a mass mobilisation that would follow on from the 300,000 men conscripted in the partial mobilisation that started on September 21.

In his New Year’s Eve video message Ukrainian Defence Minister Oleksii Reznikov specifically addressed Russians, warning them that on January 5 the borders would be closed and a mass mobilisation begun. When that deadline passed without incident, the Defence Ministry warned again that mobilisation could happen on January 15. Ukrainian intelligence officials warned that the Kremlin is planning a new mobilisation wave for up to 500,000 men to fight in Ukraine starting in mid-January, a deadline which also passed without incident. Nevertheless, observers say that the Kremlin appears to be actively preparing for a second mobilisation in the coming months.

The main fighting forces in the battle to capture Bakhmut in the Donbas region, the current epicentre of the conflict, have been led by the Wagner PMC. Kyiv has admitted that it has lost control of the neighbouring town of Soledar in the last week and Russia is now threatening to attack Bakhmut in its flank. However, these successes have come at a very heavy toll.

Olga Romanova, head of Russia Behind Bars, an NGO that protects the rights of convicts, claims that most of the tens of thousands of convicts recruited by Wagner from Russian prisons have been killed, wounded or deserted, the Kyiv Independent reports. Of the 50,000 convicts recruited by the mercenary company Wagner, only 10,000 remain in the ranks of the military, Romanova said.

Russia is believed to have lost up to 100,000 soldiers in the conflict so far, but according to estimates released on January 22 by Norway's army chief, the number of dead and wounded has reached 180,000. Norwegian Chief of Defence Eirik Kristoffersen added that Ukraine has probably lost 100,000 men and 30,000 civilians have been killed. Russian President Vladimir Putin is going to need more men if his widely expected spring counter-offensive is to have any chance of success.

Wagner has been actively recruiting to try to replenish its depleted ranks. It has set up a “cultural centre” in Serbia, where it has been accused of recruiting mercenaries to fight in Ukraine, a claim the organisation recently denied.

Amongst the recent changes to Russia’s laws, the conscription age was raised from 18-27 to 21-30, which avoids targeting students who can claim exemption if they are still at university. The change increases the size of the pool of eligible men by a third. Putin signed off on the change in December and the chairman of the Russian parliament's defence committee, Andrei Kartapolov, said in an interview with the official parliamentary newspaper that Russia could enact the change in the spring. At the same time, the exemption for 30-year-old fathers of three or more children has already been nixed.

The maximum age for voluntary recruits was also raised in May last year. Putin signed a law enabling people over 40 to enlist for the armed forces. Previously the army had age limits of 18-40 years for Russians and 18-30 for foreigners. The Kremlin presented the change as a move to recruit more technical specialists, which are required to operate high-precision weapons and "experience shows that they become such by the age of 40-45". More medics, engineers and communications experts are also being recruited.

The government has also been actively setting up recruitment centres across the country, according to various local reports.

In the most ominous move, as of March 1, private car owners in Russia may be required to book the date and time of their departure when leaving the country. The initiative launched this week by the chairman of the State Duma Committee on Transport is considered to be serious by analysts and likely to be approved, The Bell reports.

The new order will apply to both individuals and carriers, and will require that the time and date of crossing the border be approved by the State Information System of Electronic Transportation Documents (GIS EPD) that governs border crossings.

The technical infrastructure for this system is already in place, reports The Bell, and a unified electronic queue booking system for cars is already functioning. The system is currently in test mode at one of the busiest checkpoints, MAPP-Chernyshevskoye on the border of Lithuania with the Kaliningrad region.

Russia’s army has largely been manned by around half a million contract service men. The Ministry of Defence said last year it intends to increase the fighting force to 1.5mn men by hiring an additional 695,000 men this year, a number analysts say is unrealistic. If the Kremlin wants to bolster its armed forces by this amount it will be forced to roll out a mass conscription programme.

Russia’s labour pool is already under pressure from the partial mobilisation, with unemployment currently at all-time lows. Removing another 700,000 of young men would only make those problems worse. Moreover, military analysts worry that the approximately 1mn officers needed to lead these men will be even harder to find, not to mention the cost.

“It is one thing to offer vacancies on paper, and a totally different thing to fill these positions with real people pulled away from productive activities,” Pavel Luzin, a specialist in international relations and expert on the Russian Armed Forces, said in a comment for Riddle that also appeared in bne IntelliNews here.” Thus we can cautiously assume that an army of 1.5mn soldiers is a bureaucratic fantasy designed to secure, among other things, increased war-related salaries paid to soldiers and to mask the total amount of compensation paid to the wounded and the families of those killed, which would otherwise reveal the real death toll to society.”

Belarus Corruption Watch: How one of Lukashenko’s 'wallets' evades sanctions
13 hours ago
Poland basks in the glory of being Kyiv’s chief ally in Europe
3 days ago
Russia forges ahead with gas ambitions in Uzbekistan, Kazakhstan
4 days ago
Mongolian government accused of rushing through veiled law that dismantles freedom of speech
5 days ago
Davos climate change debates hindered by lack of Russian, Chinese delegates
6 days ago