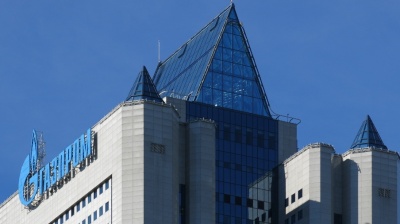 Gazprom HQ in Moscow has confirmed the good news for Turkmenistan.
By bne IntelliNews April 16, 2019

Should the imports prove to be of a sizable volume, they could turn out to be something of a breakthrough for the remote country’s long-embattled economy. Economic turmoil in the tightly controlled nation of 5.7mn last year led to reports of passport-controlled bread rationing and caused the regime led by President Gurbanguly Berdymukhammedov to scrap a quarter-century-long practice of providing free natural gas, electricity, and water to citizens in order to save money.

The price and volumes of the gas consignments, which appear to have been resumed under an existing 25-year contract between Turkmenistan and gas giant Gazprom, have not been disclosed.

Woes began with 2014 price collapse
Hydrocarbon-export-dependent Turkmenistan’s woes when it comes to Russia ending imports of its gas, which greatly exacerbated the country’s difficulties in obtaining enough hard currency, began with the collapse in world oil and gas prices in 2014. In 2015, Gazprom announced its intention to cut imports of Turkmen gas to 4bn cubic metres per year, down from the 10bn level that it had been importing since 2010. Then, at the beginning of 2016, it stopped taking shipments altogether after price disputes. That left Turkmenistan with only China as a major gas customer.

By taking relatively cheap imports of Turkmen gas, Russia used to boost its own potential for more exports of its own gas to Europe.

Moscow and Ashgabat in August 2018 signed the Caspian Sea Convention, which included preliminary plans for Russia to restart imports of gas from Turkmenistan, which sits on the world’s fourth largest gas reserves.

Turkmenistan has attempted to keep northern Iran as a substantial customer for its gas, but since the start of 2017 Ashgabat and Tehran have been engaged in a row over historical gas debts that the Iranians allegedly owe. That dispute has also gone to international arbitration.

Iranian rial drops to weakest ever level versus dollar