Russia's CBR ramps up key rate to 7.5% in hawkish move 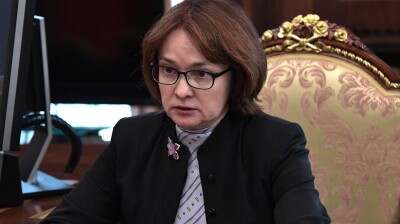 CBR Governor Elvira Nabiullina and the rest of the board have taken the markets by surprise with another hike, to 7.5%, of the Russian key rate.
By bne IntelliNews October 25, 2021

The board of the Central Bank of Russia (CBR) resolved to increase the key interest rate by 75 basis points to 7.5% at the policy meeting of October 22, making a hawkish move that surprised the market.

As reported by bne IntelliNews, Russia's consumer price inflation continued to accelerate, posting 7.4% year on year in September, exceeding market expectations and paving way for higher interest rates. Last month the CBR continued to toughen its monetary policy and raised its key rate by 25 basis points to 6.75% per annum.

However, the market expected a hike of 50bp from the regulator, with some believing that the prospect of slamming the brakes on economic growth from upcoming lockdowns could mean a more modest hike of 25bp.

But with a 75bp aggressive hike the CBR has remained strictly inflation-minded, saying in an accompanying statement that "the balance of risks for inflation is notably tilted to the upside,” and seeing the risks of "a more sustained deviation of inflation from the target."

Inflation prime concern
Previously, as inflationary and external conditions worsened sharply in 2018, Governor of the CBR Elvira Nabiullina showed that she was not afraid to hike rates boldly, and famously maintained that "it is better to hike the rate a little now than a lot later".

This year the CBR has already hiked the rate by a total of 325 basis points, even as the economy started to slow down and the growth could further be limited by lockdowns planned for the end of October. The latest hike of 75bp is not the sharpest one this year, as in July the regulator implemented a 100bp increase.

"The CBR pre-emptively hiked the key rate to bring market interest rates closer to inflation levels to incentivise more saving and to lessen demand amid supply constraints," Sova Capital commented, seeing inflationary pressures as persisting in 4Q21, as supply disruptions and labour shortages will not be easy to overcome in the short term.

"The decision is sharper than expected, intended to signal to the market that the Bank of Russia is really concerned with the spike in CPI and inflationary expectations,” chief economist at ING Bank in Moscow Dmitry Dolgin told Bloomberg. “Inflationary risks are prioritised over the risks to economic activity due to the new wave of COVID in Russia,” he added.

Sova Capital also sees the critical message from the CBR’s statement is that it "is ready to bring inflation down to 4-4.5% y/y by 2021, which is in line with our current forecasts. In our view, this could mean that CBR needs to hike the key rate to more than 8% at its upcoming meetings".

More hikes to be expected
"The readings from the updated mid-term forecasts imply that CBR reserves the option to hike the key rate to 8.5% in 1Q21," Sova argues.

Aton analysts believe that further key interest rate increases by the end of 2021 are likely, warning against the traditional hike of budget spending towards the year of the end, which could bring additional inflationary pressures.

Bloomberg reminds that after Brazil, Russia has been one of the most aggressive among emerging markets in raising rates to combat rising inflation this year. In the meantime, Turkey this week surprised with a big cut, pushing the Turkish lira lower.

At the press conference of the CBR following the policy rate decision, Nabiullina attributed the inflation to persistently high inflationary expectations and still disrupted supply chains making supply lag behind demand. As such, given limited supply, the growth in demand does not translate into growth in consumption, but fuel price growth.

In the meantime, Nabiullina dismissed the arguments that lockdowns could help tame inflation. The head of the CBR sees it as a pro-inflationary factor, since this may be accompanied by a reduction in supply (due to a halt in production), rather than in demand.

Higher interest rates to support ruble
On October 22 the ruble extended its recent gains after the CBR decision, advancing by as much as 1.8% against the US dollar to RUB69.82, marking a largest intraday rise since May 7. The Russian currency has been rising on the expectations of more rate increases and growing oil prices.

Otkritie Bank argues that higher key interest would lead to increased ruble volatility in 2022-2023, as high interest rates will maintain inflows to the money market and OFZ federal ruble bonds.

However, while the ruble will strengthen on high oil and gas prices, a higher inflow of non-resident investors to the OFZ market will increase the currency's sensitivity to geopolitical shocks, which could eventually lead to a downwards correction in 2022-2023, Otkritie warns.

Analysts surveyed by The Bell also believe that toughening of the monetary policy and higher guidance for the key interest rate is positive for the ruble in the short to medium term. The higher the key interest rate, the more attractive fixed income instruments will become vis-a-vis the equity market, they believe. In the short term, Russian equity is still seen as supported by high commodity prices, quantitative easing in the US and the EU, and a rise in global equity indices.