Russia's inflation slows to 5.5% in April, but uptick still expected 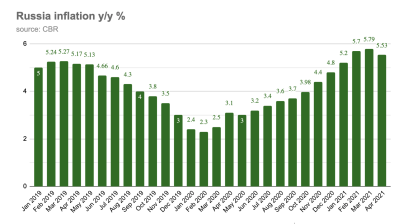 Russian inflation eased slightly in April to 5.5%
By bne IntelliNews May 11, 2021

Russia's annual consumer price inflation in April 2021 slowed down to 5.5% from 5.8% year on year in March, according to the latest data from RosStat statistics agency, and in line with expectations.

As reported by bne IntelliNews, inflation remains in focus after the key interest rate hike by the Central Bank of Russia (CBR). While annual inflation was seen to have peaked in March at 5.8%, inflationary expectations remain high and latest weekly inflation data suggests that price growth could still accelerate in the coming months.

"Weekly CPI data shows that inflationary pressures remain strong, which may prompt the CBR to tighten monetary policy further," BCS Global Markets also commented on May 11, even despite a marked slowdown in monthly inflation from 0.8% month on month in April to 0.3% m/m in May.

"While consumer inflation started to moderate in April on the back of higher base effects, the weekly data at the beginning of May show that inflation processes still remain elevated, with the weekly print persistently holding at 0.2% week on week," Sova Capital analysts remind.

"Importantly, core CPI, which is a better gauge of inflation processes (excluding the most volatile components), continued to rise, reaching 5.47% y/y in April vs. 5.38% y/y in March," Sova Capital noted on May 11.

Chief BCS GM economist Vladimir Tikhomirov suggests focusing on two important factors that could help to reverse the inflation trend on a two to three-month horizon – one is the ruble exchange rate and the other is the volume of the new vegetable harvest.

"There are two important factors that could help to reverse the inflation trend on a 2-3-month horizon – one is the RUB exchange rate and the other is the volume of new vegetable harvest," Tikhomirov said in a note.

Last week, the ruble posted a major gain, strengthening by a whole ruble to close the week at Rb73.8/$, a level last seen in mid-March. As bne IntelliNews has reported, the ruble has been particularly volatile this year as it has almost completely decoupled from the price of oil and reacts almost entirely to the ebbs and flows of geopolitical tensions.

At the height of the tensions in April following Russia’s build-up of troops on the Ukrainian border the ruble spiked to reach RUB77.7 to the dollar, only to drop away again by several whole rubles to the dollar as the Russian troops were returned to barracks at the start of May.

These violent swings feed rapidly through into prices as merchants build in margins to prices to account for devaluation so they can afford to replace goods that they have imported.

“If the ruble retains these gains, there is little doubt that a stronger currency will help to stabilise import prices in the mid-term,” says Tikhomirov. “At the same time, a better harvest this year will facilitate a seasonal rise in deflationary pressures in the food category, perhaps as early as late June-early July. These factors will be among the key trends that the CBR will have to consider when it meets in a month to assess its monetary policy.”

BCS GM expects the regulator to deliver another 25-50 basis point rate hike, which might be the last one this year if the CPI rate starts to slow in 2H21. By end-2021, the CPI rate will stand at 5.5%, with inflation running at 4.9% y/y, the analysts estimate.

In Sova Capital's chief economist Artem Zaigrin's view, as the low base effects and food inflation shocks pass, the main drivers for the y/y headline should shift from food components to non-food items and services.

The main reasons for the pick-up in such prices could be the pass-through of higher costs from producers to consumers due to the weaker FX rate, which could be amplified by supply-demand mismatches after coronavirus (COVID-19) disrupted supply chains, Sova analyts argue, already seeing such disruptions in the emerging deficits seen for low-end computers, bicycles and cars.

Elevated inflationary pressures amid the rapid recovery in domestic demand led the CBR to hike the key rate 50bp in April, Sova Capital remind. Sova does not rule out the further frontloading of rate hikes at CBR’s upcoming meetings in June and July, and now sees the key rate at 6% by 2021 and the rate-hiking cycle ending at 6.5%.

Sberbank CIB, however, believes that the y/y disinflation in April supports the view that inflation peaked in March and has entered a downtrend. "Although we could see an uptick in May (given the low base), the y/y figure is on track to meet our year-end forecast of 4.6%," the analysts wrote on May 11.

Romania’s industry returns to pre-crisis maximum, but some sectors may never recover
8 hours ago
Once buoyant Romanian wages show signs of fatigue
1 day ago
Russia's CBR ups rate by 50bp to 5.5%, will keep hiking
4 days ago
Moldova’s headline inflation rises to 3.1% y/y and is going up
4 days ago
Serbian central bank keeps key policy rate unchanged
4 days ago