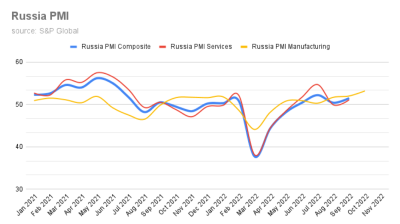 S&P Global released an extraordinary PMI survey result that shows business is up, consumers are buying, inflation is falling, and firms are both hiring more workers and investing in expansion. Sanctions are causing problems, but Russia's manufacturers are shrugging them off. / bne IntelliNews
By bne IntelliNews December 1, 2022

The very strong PMI result, where any result above the no-change 50 benchmark is an expansion, is the latest in a slew of encouraging economic statistics. Forecasters have been improving their outlook for the Russian economy all year as predictions went from a 15% contraction projected in January to the latest forecasts of under 3%.

The Russian result is also strikingly better than the European average, which is still contracting. From the perspective of PMIs, sanctions have done more harm to Europe than they have to Russia.
“The eurozone manufacturing PMI rose to 47.1 in November. This corroborates our view that manufacturing is headed for a winter recession but tentatively suggests we may now be past peak weakness,” Riccardo Marcelli Fabiani, an economist with Oxford Economics, said in a note.
“While the rise is good news, the details of the survey temper optimism due to falling production levels, as well as deteriorating orders. Moreover, high stock levels will drag down activity once the restocking process is complete,” Fabiani added.

The news comes on top of the latest RosStat release that revealed Russia's basic sector output fell by only 3.2% year on year in October, an improvement from the 3.5% drop in September, and output was down a mere 1.1% y/y in 10m22.

At the same time, oil production was expected to slump by about 15% this year due to sanctions on Russia, but is on course to end the year ahead of last year’s result.

“We estimate that basic sector output rose 0.6% month on month in October adjusted for seasonality, driven by construction (up 1.7% m/m), transport (0.3%) and industrial production (0.7%). In y/y terms, construction activity rose 9.8% y/y (versus 5.8% in September), while the decline in industrial production eased to 2.6% (from 3.1%),” analysts from Sber wrote in a note. “Growth in the agriculture sector slowed to 4.2% y/y (from 6.7%), while the retail and wholesale trade sectors continued to contract, shrinking 9.7% and 22%.”

Sber speculated that heavy government spending was holding up the economy and that sanctions on Russia have yet to have much of an impact on the domestic economy or the population.

“We expect investments to continue declining q/q in 4Q22, but we still think the full-year investment figure will be higher than last year's,” Sber said.

Unemployment was also expected to spike this year, but instead it has remained at an all-time low of 3.8%, although it ticked up one percentage point in October to 3.9%.

The fall in real wages of only 1.4% y/y in September from 1.2% in August has also been surprisingly mild and consumer spending power has been helped by the Central Bank of Russia's (CBR) effective efforts to contain inflation, which is falling slowly. Nominal wage growth stood at 12.1% y/y, while real wages shrank 1.9% y/y in 3Q22 after dropping 5.4% in 2Q22.

“All in all, the October statistics were better than we had expected, so we think basic sector output could continue to grow q/q in 4Q22 despite the developments in September. We now project the decline in GDP this year at 2.8%,” Sber said.

These solid results were visible in the PMI survey, where manufacturers registered a softer uptick in cost burdens amid reports that some supplier prices had fallen. Contrastingly, output charges were broadly unchanged following back-to-back monthly declines, with some firms passing through higher input prices to customers.

The production levels at Russian goods producers have risen at their fastest pace in five years midway through the fourth quarter.

“The rate of expansion was the joint-sharpest since March 2019, as firms attributed the rise in output to stronger client demand and increased new order inflows. Total new sales were largely led by domestic customers as sanctions weighed on foreign client demand, with new orders rising at a solid pace,” S&P Global said.

Managers said that customer demand was up and they were finding new clients. However, unsurprisingly, new export orders contracted for the tenth month running in November, and at a steep pace, according to S&P Global. The new demand also meant that Russian firms were hiring to keep up with demand.

Although employment rose marginally, pressure on capacity was reflected in a renewed increase in backlogs of work. The level of outstanding business expanded for the first time since January.

While inflation remains in double digits at 13%, the PMI survey confirms the CBR’s recent comments that price rises have probably peaked and could fall in the coming year. S&P Global reported that the pace of cost inflation softened from October amid reports that some supplier and material prices had fallen, though reports persisted of increased logistics and transportation costs.

“As a result, manufacturers left output charges broadly unchanged in November. Where an increase was noted, firms linked this to the pass-through of higher costs, but many mentioned offers and efforts to drive sales dampened any increases in selling prices,” S&P said.

Greater demand spurred firms on to build inventories as stocks of purchases rose for the first time in over 25 years and holdings of finished goods increased solidly.

Hopes of further new order growth supported business confidence in November. Russian goods producers recorded stronger optimism in the outlook for output over the coming year, with positive sentiment the second-highest since April 2019. Companies were also buoyed by planned investment in modernising operations.