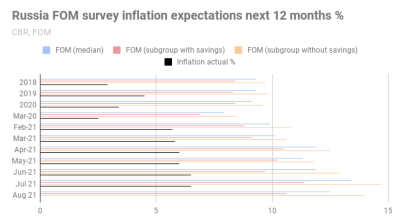 Inflation in July was 6.5% but a CBR poll found the population think prices have risen by 18.5% in the last year and will increase by 12.5% in the next year, despite the official forecast for inflation to fall to about 4% in 2022.
By bne IntelliNews September 6, 2021

Russian inflation expectations remained very high in August, according to the latest Public Opinion Foundation (FOM) report commissioned by the Central Bank of Russia (CBR) and released in August.

The median estimate for price over the last 12 months amongst regular Russians polled by FOM was 16.5%, whereas the actual rate of inflation in July was 6.5%. Households' expectation for price rises over the next 12 months is a slightly lower 12.5% in August, down slightly from 13.4% a month earlier, but still more than twice the actual rate of inflation.

Inflation has turned into a real problem. The regulator completely crushed consumer price inflation (CPI), which fell to a post-Soviet low of 2.2% in January 2018, allowing the regulator to cut interest rates in an unbroken six-year long run that brought rates down to a historic low of 4.25% – on a par with “normal” countries.

However, by 2019 inflation had already begun to creep up to start 2019 at 5%, although the CBR managed to bring it back down to 2.4% by the start of 2020. But the coronavirus (COVID-19) pandemic and oil price shock in March 2020 has set inflation off again, driven mainly by surging food prices and the knock-on effect of distributed supply chains.

Analysts predicted that inflation would peak at 5.8% in March this year, but prices have continued to climb despite an aggressive set of rate hikes by the CBR: March (25bp), April (50bp), June (50bp) and July (100bp). With inflation at 6.5% in June and July, and widely expected to tick up again to 6.7% in August, the CBR is anticipated to hike rates for a fifth time this year at the September monetary policy meeting by 25-50bp.

CBR governor Elvira Nabiullina has become increasingly pessimistic and disagrees with her peers in the Western central banks, who believe the high inflation is associated with the crisis and will fade. The CBR points to the very high expectations for price rises amongst regular Russians and says their expectations have become “unanchored” from reality and that in itself is inflationary.

The outlook for price rises depends on the social standing of those polled. While the median expectation for inflation going forwards is 12.5%, for those Russians with no savings – about two thirds of the population – prices are expected to increase by 14% over the next 12 months – almost three times more than the CBR’s forecast.

The poor segment of Russians has a higher expectation of inflation, as a much larger share of their average shopping basket is made of food, where price rises have been in high double digits in the last year, although prices fell somewhat in the summer.

In August, amid a seasonal downturn in fruit and vegetable prices respondents noted increased prices for this subgroup appreciably less often than a month before, the CBR noted. “Moreover, respondents tended to mention less often eggs, sugar, fish, cereals and pasta as the goods whose prices increased most of all. In August, a considerable increase in the prices for construction materials and utility services was also noted more often. Rising concerns about a surge in utility prices was associated with the seasonal indexation of utility rates. RosStat recorded high growth rates of prices for construction materials in July 2021.”

Businesses are also worried about rising prices but much less so than the population. The Bank of Russia’s monitoring shows that companies’ short-term price expectations were virtually unchanged, but remained elevated.

And the bond market projections tally much more closely to those of the regulator. The implied inflation rate from the prices of the Russian Ministry of Finance ruble-denominated OFZ treasury bills that mature in August 2023 is 4.1%, on a par for the inflation assumptions in the other longer dated bonds.