Russian retail sales surge 5.6% y/y in September on the back of real income growth, savings spending 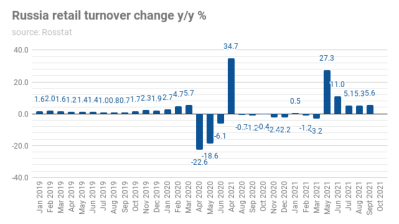 Russian retail sales surge 5.6% y/y in September after real income growth went back into the black and the population spent some of its savings. / bne IntelliNews
By bne IntelliNews November 2, 2021

Retail sales in Russia surged 5.6% year on year in September of 2021, accelerating from a 5.3% increase in the previous month, above market expectations of a 3.8% rise. On a monthly basis, retail sales declined 1.5%, after a 3.4% gain in August.

Private consumption recovered strongly in the first half of the year, with seasonally adjusted consumption in the second quarter of the year being the highest ever recorded. This was influenced by e.g. recovery of savings accumulated during corona periods to consumption. Russia's seasonally adjusted GDP grew by as much as 3.5% in the second quarter from the first quarter. Economic activity has thus clearly risen above pre-pandemic levels.

A more robust economic backdrop led to higher incomes. The growth in real disposable incomes in 3Q21 surged to 8.1% y/y vs. 7.4% y/y in 2Q21 and -3.7% y/y in 1Q21. Real money incomes were mainly driven by the expansion in salaries and wages; entrepreneurial activity; and social outlays. While the recovery in corporate profits supported salaries and wages, budget spending boosted social expenditures. The unemployment rate improved further, falling to 4.3% SA in September vs. 4.4% SA in August.