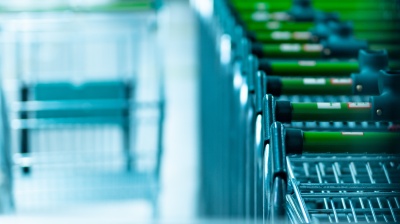 A shopping trolley bay
By Theo Normanton in Moscow November 5, 2021

In Russia, where shoppers are used to getting good value for money, rising prices are sending more customers in search of bargains.

Value retailers are set to benefit from a combination of shifting behavioural trends, increased spending on daily essentials in response to economic pressures, and a set of competitive advantages which will come to the fore as inflation shakes up the market.

As consumers around the world emerge from a protracted period of COVID-induced frugality and the global economy strains to keep up with rising demand, inflation is surging. The US inflation rate rose to a 13-year high of 5.4 percent in September, and the EU saw a 10-year record of 3.4 percent the same month. Russia is no exception: the Ministry of Economic Development has estimated an annual consumer price index rate (CPI) of over 8% for 2021, the highest since 2016.

This will result in increased spending as saving rates are reduced. At the same time, it will see shoppers spend less on big ticket items like cars as they notice the effect of inflation on their real incomes. Instead, they will spend more money on less expensive items, including daily essentials. This plays into the hands of value stores, which are already on an upward trajectory in Russia.

Value retailers will further benefit from their ability to consistently keep prices lower than competitors. Competitive advantages, including a diversified supplier base, a broad and rotated assortment of products, and strong automation and standardization, will allow value stores to avoid – or at least delay – price hikes, effectively outrunning inflation.

Russian Fix Price, with a 93% market share, is one well positioned variety value retailer. It has built its network through successive economic crises, finding opportunity in a challenging economy.

Fix Price targets the bulk of Russian shoppers: those who have a monthly income of less than 40,000 rubles. Yet thanks to a shift in buying habits toward price awareness it is also enticing shoppers with higher incomes. Fix Price aims to attract all price-conscious shoppers, regardless of their income, via value and new variety.

Whereas hard discounters opt for large retail units away from population centres in an effort to reduce rent costs and online shops offer increased convenience for a higher price tag, value retailers represent the best of both worlds.

Mercury Retail Group, which owns Russian convenience chains Red & White and Bristol, is focusing on the ultra-convenience model, with a wide network of stores, especially in busier areas. Mercury is able to keep property costs low due to long-term rental contracts and a lack of competition with supermarkets. The group also saves by avoiding fresh fruit and veg and associated stocking costs.

Value retailers additionally control costs by tweaking packaging or the number of items per pack, which leaves the price of a product unchanged, and in some cases even reduces it. This keeps prices stable in challenging times, preventing shoppers from going elsewhere or changing habits. Value stores are able to do this via a higher share of private label goods, which allows quick response adjustments to changes in shopper demand.

It comes as no surprise, given the increasing popularity of ultra-convenience stores, that Mercury Retail Group is planning an IPO before the end of 2021. Retail analytics agency GFK sees the size of the ultra-convenience market in Russia growing threefold by the end of 2025. Mercury Retail aims to keep up, intending to double in size in the next three or four years.

In grocery stores, Russian consumers are increasingly choosing value over brands. In fashion, though, the two categories are not mutually exclusive. Off-price retailers buy excess inventories from a variety of big brands and sell them to value-conscious consumers at a fraction of their original price. In America, the off-price segment is led by multibillion-dollar companies like TJX and Burlington, but the trend is just taking off in Russia. In the US market, approximately 10 percent of the apparel market is the off-price segment; in Russia, it’s only around one percent. It has plenty of room to grow.

This represents significant market opportunity. Many buyers still remember the Soviet era, when branded clothes were so hard to come by that only the elite could afford them. They became associated with luxury, celebrity, and status. Now that they’re widely available, branded clothes are something that ordinary Russians are willing to pay for, assuming they’re competitively priced.

Russia’s leading off-price retailer is Familia, which offers brand and quality conscious shoppers products from more than 5,000 different brands. Familia provides a 'treasure hunt' experience to customers, enabling them to bargain hunt for unique branded items at highly discounted prices (up to 85% off recommended retail prices). It acquires products from other retailers at reduced prices as those retailers clear room for next season’s merchandise, for example. Familia gets further discounts by agreeing to sell the acquired stock in a physical retail unit, and not compete online.

Behavioural trends will drive off-price retailer growth in Russia. Familia plans to have 390 stores by the end of the year, 20% more than the end of 2020. Fix Price, already in 78 out of Russia’s 85 regions, is reported to be mulling expansion into Uzbekistan, Kazakhstan, and Belarus, according to news site KUN.uz. Mercury, meanwhile, will use the proceeds of its IPO to grow its network of 14,000 stores across Russia still further as it invests in meeting growing demand.

It is perhaps surprising to see such rapid growth of a sector amid inflationary pressures and stagnating personal incomes. Yet the trend for rational shopping is no doubt catalysed by these economic forces. This turn to value has a strong underlying economic logic, which suggests that this shift in consumer preferences may far outlast the global economy’s present state of disarray.