The brine shrimp riches of Lake Urmia are said to be so extensive they could make West Azerbaijan province independent of Iran's central government budget.
By bne IntelIiNews August 31, 2021

Iran’s Lake Urmia is reportedly a rich source of Artemia, or “brine shrimp”, that could prove to be a big hard currency earner for the country. 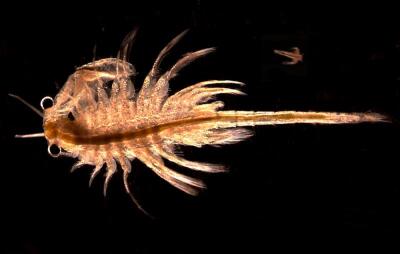 Artemia are found in inland saltwater lakes but not in oceans (Image: dipmapleferryman, CC-BY-SA 2.0).

Exploiting the full reserves of Artemia in the salt lake could even make the northwestern West Azerbaijan province independent of the government budget, according to Salman Zaker, a member of the Majlis (Iranian parliament), as quoted by news agency IRNA. Each kilogram of the aquatic crustacean could fetch around Iranian rial (IRR) 35mn ($128 on the open market), the lawmaker said.

Artemia are found worldwide in inland saltwater lakes, but not in oceans. Their dormant eggs, or cysts, are extensively used in aquaculture. The cysts can be stored for long periods and hatched on demand to provide live feed for larval fish and crustaceans. Brine shrimp are able to avoid cohabiting with most types of predators, such as fish, as they have the ability to live in waters of very high salinity (up to 25%). They are also seen as a model organism that can be used in testing the toxicity of chemicals.

The resilience of Artemia—hundreds of years ago once thought of as a “worm” with the intriguing ability to live in saline water—has led to novelty gift sellers marketing certain breeds as “sea monkeys” or “aqua dragons”.

Iran is presently an Artemia importer, but Zaker noted that of the nine species so far registered in the world, one of the most important is Lake Urmia’s Artemia urmiana.

Over 2,000 tonnes of dry Artemia cysts are marketed worldwide annually, IRNA reported, adding that an assessment of the average Artemia capacity of Lake Urmia in 2019 showed that in normal conditions there would be enough of the crustacean to meet domestic demand and fulfil annual export orders for 180 tonnes of cysts and 120 tonnes of live Artemia.

Natural conditions and infrastructure for farming Artemia in Lake Urmia are available but they are not exploited, Zaker was reported as saying.

The MP said the private sector should be supported in breeding Artemia, with the artificial breeding of Artemia in the southern part of the country something that should also be considered.

The first scientific record of the existence of Artemia dates back to the first half of the 10th century AD, according to the International Journal of Aquatic Science, although the first unambiguous record of Artemia is a report and drawings made by Schlosser in 1757 of the crustacean in Lymington, England.

Lake Urmia, with approximately 102 islands, is protected as a national park by the Iranian Department of Environment. Some locals refer to it as a “sea”. At its greatest extent, the lake was the largest in the Middle East and the sixth largest salt lake on Earth with a surface area of approximately 5,200 square kilometres, but by 2017 the lake had shrunk to 10% of its former size due to persistent drought, the damming of rivers and the pumping of groundwater. However, the lake started expanding in 2019, making a small recovery.