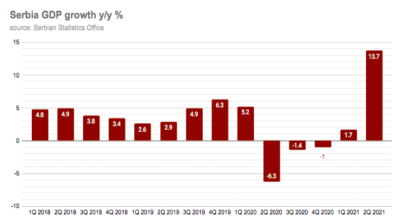 The real GDP growth in the second quarter of 2021, compared to the corresponding period of last year, amounted to 13.7%, the Statistical Office of the Republic of Serbia announced in a statement. The figure is revised slightly upwards from a previous estimate of 13.4%.

According to seasonally adjusted GDP data, gross domestic product increased by 1.3% in the second quarter of 2021, compared to the previous quarter.

Serbia’s economy weathered the coronacrisis well, dipping by only 6.3% in Q2 2020 and returning to year-on-year growth in the first quarter of this year. In contrast to some of its tourism-dependent neighbours, Serbia has a diversified economy and was also on a strong fiscal footing at the start of the crisis.

In mid-August, the National Bank of Serbia (NBS) raised its projection for the country’s GDP growth this year to 6.5%, from the 6% it projected in May.

Based on an analysis of planned capital projects in road, railway, energy and utility infrastructure in the next ten years and their direct and indirect effects on other parts of the economy, the central bank also revised the medium-term economic growth projection from 4% to the range of 4-5%. The central projection of GDP growth over the medium term now stands at 4.5%, while overall risks to the projection are judged to be symmetric, the report said.