Serbia to produce Chinese as well as Russian vaccine 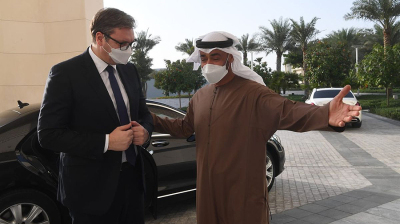 President Vucic on a working visit to the United Arab Emirates
By Eldar Dizdarevic in Sarajevo March 14, 2021

Serbia will become the first European country to produce the Chinese Sinopharm coronavirus vaccine, President Aleksandar Vucic announced during a visit to the United Arab Emirates on March 11.

Serbia is a leader of the vaccination process in Europe. Government data show that by March 8, more than 1.65mn doses had been administered, and more than 620,000 people have received their second dose.

Serbia is already preparing to produce Russia’s Sputnik V vaccine, and Vucic announced that a deal concerning the construction of a “vaccine factory” will be signed in the next two weeks, and it will be built with the support of China and the UAE.

"I bring you a piece of almost unbelievable news from the United Arab Emirates. We made a big deal tonight. We will build a completely new factory for Sinopharm vaccines together with the UAE and the Chinese in Serbia and start producing vaccines as early as October 15,” stated Vucic, according to a statement from the presidency.

"We will have a completely new vaccine factory that will be able to produce other vaccines in the future; when you have a coronavirus, it is clear that in ten or more years there will be new viruses.”

Serbia will supply the vaccine not only to its own population but to other countries in the region. Belgrade has already delivered vaccines to some of its neighbours, which have been much slower to start vaccination of their populations.

Serbia has close diplomatic and economic ties with Moscow and Beijing, and has secured large shipments of the Sinopharm and Russia’s Sputnik V vaccines. The production of the Russian vaccine Sputnik V at the Torlak Institute in Belgrade is to begin on May 20, 2021, reported local media.

Despite the rapid vaccination programme, Serbia has experienced a sharp increase in new COVID-19 cases recently and the government is considering new restrictions.