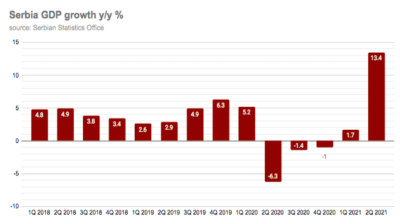 The National Bank of Serbia
By bne IntelliNews August 18, 2021

The National Bank of Serbia (NBS) has raised its projection for the country’s GDP growth this year to 6.5%, from the 6% it projected in May.

While it contracted during the later three quarters of 2020, the impact of the coronavirus pandemic on Serbia’s economy was relatively mild compared to others in the Southeast Europe region. The economy returned to year-on-year growth in the first quarter of 2021, and growth accelerated to 13.4% in the second quarter.

“Based on the indicators in the first six months and the expected movements in the key sectors of the Serbian economy by the end of the year, we revised our economic growth projection for 2021 upward, from 6.0% to 6.5%,” the NBS said in its August report on inflation.

Based on an analysis of planned capital projects in road, railway, energy and utility infrastructure in the next ten years and their direct and indirect effects on other parts of the economy, the central bank also revised the medium-term economic growth projection from 4% to the range of 4-5%.

The central projection of GDP growth over the medium term now stands at 4.5%, while overall risks to the projection are judged to be symmetric, the report said.

According to the NBS' new projection, taking into account the estimated effects of planned infrastructure projects, the share of construction in GDP in the medium term should reach around 7% instead of the previously expected 6%, and this sector’s growth should have a positive impact on growth in industry, trade, transport, tourism, catering, finance and real estate.

The share of total fixed investment in nominal GDP in the next few years is projected to exceed 26% and remain at a high level. The improved quality of infrastructure will positively reflect on the productivity of the overall economy and continued strong inflow of FDIs, thus creating conditions for the sustainability of the projected growth in the medium term, the NBS said. 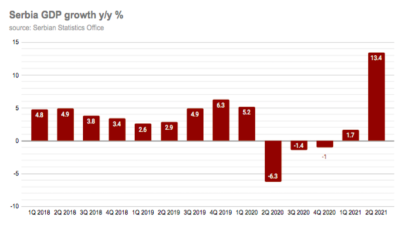