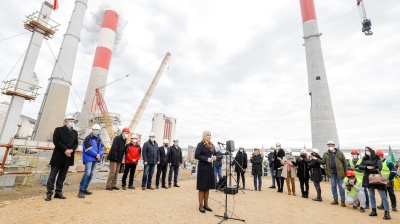 The delays in the construction of Block 3 at the Kostolac B Thermal Power Plant (TPP) and the current quality of the works are unacceptable, warned Serbian Deputy Prime Minister and Minister of Mining and Energy Zorana Mihajlovic, a government statement said.

China Machinery Engineering Corporation (CMEC) is building the 350 MW block 3 of the coal-fired Kostolac TPP. It is currently the largest project in the energy sector in Serbia — and the largest investment in the sector in the last three decades — and is very important for the electricity system.

Speaking to the main representative of the Chinese company, Li Xueqiang, and the general manager of the CMEC office in Serbia, Ren Kailong, Mihajlovic criticised both the quality of the work delivered so far and the late realisation of the project, the ministry said in a statement.

Mihajlovic called for work to be speeded up so that a “satisfactory level” would be reached by July this year. She also pointed out that the Chinese company needed to comply with the international standards and the obligations defined in the agreement.

The minister has repeatedly complained about the slow work on the project, saying that a proposal by CMEC — which had announced the slowdown of works due to the pandemic — to complete it by autumn 2022 is unacceptable.

In December, she told the Chinese company: “I am here today to send a clear message to the contractor that we will not tolerate some things … I know how well other Chinese companies are doing in Serbia, and CMEC will have to join them.”

CMEC started construction works on the new block in November 2019. The construction of the 350MW unit will cost $613mn, while the whole project is estimated at around $716mn.

The Kostolac project is being implemented on the basis of the interstate agreement between Serbia and China on economic and technical cooperation in the infrastructure field, signed on August 21, 2009.

Chinese Exim Bank provided 85% of the funding for the new unit, and the remaining 15% is from Elektroprivreda Srbije (EPS). The repayment period for the loans is 20 years, including a grace period of seven years, with a fixed interest rate of 2.5%.

Serbia is an important destination for Chinese investment in Southeast Europe, which has been encouraged by Belgrade as it pursues its four-pillar foreign policy, balancing relations with the EU, the US, Russia and China.

While criticising the work on the power plant construction, Mihajlovic also highlighted the “great relations” between Serbia and China, a major investor in Serbian energy projects, and the friendship of their two presidents, Aleksandar Vucic and Xi Jinping.

“The Serbian side is there and will not stand on the sidelines, simply observing the realisation of the project. We will work even harder to help you,” Mihajlovic said, indicating that solutions to the issues at Kostolac B will be found.

Chinese banks have become virtually the only option for governments and state power companies in countries from the region hoping to find backers for investments in coal capacity, after multilateral development banks decided in 2013 to stop financing new coal-fired power plants.

Environmental groups have objected to the new unit, saying it will add to air pollution in a region where numerous new coal fired power plants are planned. Building additional coal generation capacity is also at odds with Serbia’s quest for EU accession, as it and other candidate countries from the region are expected to reduce greenhouse gas emissions.

Kyrgyzstan hits Canadian gold mine operator with $3.1bn fine and unveils law on state takeovers of companies
8 hours ago
ECHR deals big blow to Polish government-dominated top court
19 hours ago
Germany deal to buy Sputnik V dead, but India to receive 360mn doses
19 hours ago
Lukashenko signs decree on the transfer of power in the event of his death
20 hours ago
Amnesty International restores Navalny’s Prisoner of Conscience status
1 day ago