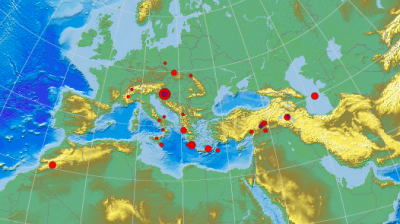 A series of three earthquakes have caused injuries and damage to buildings in Croatia.

The initial earthquake measuring 5.3 on the Richter scale occurred at 6.23am local time on March 22. The epicentre was just 7km north of the Croatian capital, at a depth of 10km.

Within an hour it was followed by a slightly smaller earthquake, measuring 5.0 at 07.01am, then another at 07.41am, measuring 3.7. Smaller tremors continued during the morning.

The quakes were also felt in Austria, Bosnia & Herzegovina, Hungary and Slovenia.

Widespread damage was reported to buildings in Zagreb, and photos from the city show debris strewn across the streets and cars crushed by falling masonry.

Among the buildings to sustain damage was Zagreb cathedral, where the top of one of the two spires collapsed. The cathedral dates back to the 13th century, but was rebuilt after it was brought down by a major earthquake in 1880.

Local media initially reported one death as a result of the quake. However, it was later reported that one 15-year-old girl had sustained serious injuries and 14 other people milder injuries.

The earthquake struck as Croatia was already struggling to contain the outbreak of coronavirus (COVID-19). So far 126 cases have been confirmed in the country, with a jump of 45 new cases on March 21.

This has worried the authorities who fear that infections will spread more rapidly as people are forced out of their homes.

“We appeal to the citizens of the City of Zagreb who came out after the earthquake, KEEP YOUR DISTANCE! We know you are upset, but keep in mind the situation we are all in. Follow the instructions of the city services and relevant institutions, but first of all, once again, SPACE!” said a notice posted by the government on Twitter.

LONG READ: The Growers - a handful of countries in New Europe are coping with the coronacrisis and are still expanding
New coronavirus cases decline across emerging Europe but the epidemic’s not over yet
Movie night at the airport