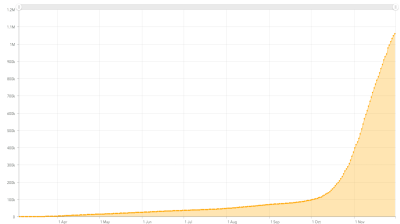 The number of new confirmed COVID-19 (coronavirus) cases in Poland dropped to just 5,733 as of November 30, the health ministry said.

The figure is a sharp drop versus the 11,483 cases recorded the preceding day and over three times less than the seven-day average. Still, coupled with the worryingly very high percentage of positive tests – 22.8% on November 30 – it has prompted questions on the handle Poland’s right-wing government has on the pandemic and what measures it has undertaken to fight it.

According to the guidelines of the World Health Organisation (WHO), the percentage of positive tests should not exceed 5%. A higher percentage means the testing effort is spent on testing the obvious cases while mild or asymptomatic cases go undetected while still spreading the pathogen to the potentially vulnerable.

Poland recorded a 47% positivity ratio of coronavirus tests on 15 November. The last time when the percentage of positive tests was below 10% was on October 7, while September 23 was the last day when it was below the WHO guidelines’ level.

The large number of untested cases is happening while the government also has nearly run out of options to tighten restrictions, experts point out.

Striving to fend off recession deeper than the projected 3-4% fall at the end of 2020, the government has even eased some of the curbs, such as re-opening retail – with anti-virus precautions mandatory – for the final weeks before Christmas.

Earlier in November, an unofficial database of the pandemic in Poland - run by an amateur 19-year old - showed that as many as 22,000 cases were missing from the official count.

The government has since launched its own statistical website, which faced immediate accusations of obscuring and manipulating data after local epidemiological stations were forbidden to publish their daily data on new cases and deaths.

The current level of restrictions – open but limited retail, no events and public gatherings, closed schools – will last until December 27 and could be eased from the following day unless the number of officially recorded cases drops.