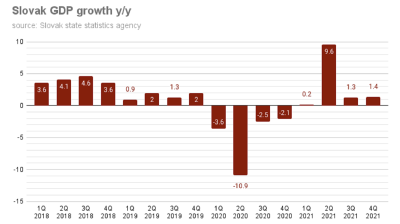 The Slovak economy posted an annual growth of 1.4% in 4Q21 and of 3% for the whole 2021, driven by domestic demand, shows data released by the Slovak Statistics Office.

"The post-pandemic recovery was disrupted by a relatively strong Delta wave of the pandemic at the end of the year. However, its negative economic impacts were a bit slighter than in the previous pandemic waves," UniCredit Bank analyst Lubomir Korsnak said, as  quoted by the Slovak News Agency.

“Overall, in 2021, GDP lagged behind pre-pandemic values by 1.5%, and industrial performance was even lower, at 7.4%,” the statisticians commented, adding that the volume of GDP amounted to €25.6bn at current prices.

In constant prices, the Slovak economy was still by around €100mn behind the pre-pandemic level of 4Q19. “Individual sectors of the economy began to compensate for the declines of the first year of the pandemic [2020], when the entire Slovak economy dropped by 4.4%,” they noted.

In terms of production, the performance of the economy at the end of last year was slightly better year-on-year, with gross value added at almost €22.7bn, up by 0.5% y/y. Wholesale, retail, transport and storage, accommodation and catering sectors recorded strong annual growth (11%), followed by construction with a y/y growth of 2.4%.

As Korsnak pointed out, the Slovak economy benefited from the partial loosening of "bottlenecks" in global supply chains, which supported a restart of the automotive industry. "Recent days highlighted geopolitical risks that should also have a negative impact on Slovakia's GDP growth during the rest of the year. The economic recovery should continue to be decelerated by ´bottlenecks´ in global supply chains,” he said.

“Although we expect them to gradually ease during the year, they will not fully disappear by the end of the year. Moreover, the conflict in Ukraine and sanctions stemming from it might disrupt some other supply flows," Korsnak noted.

"The current escalating conflict in Ukraine, along with imposed sanctions and supply chain pressures, will slow down the economic recovery after the pandemic crisis. This will result in a deceleration of GDP growth and increased inflation," added Slovenska Sporitelna analyst Matej Hornak.