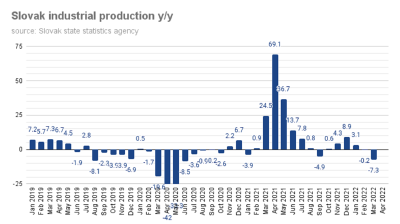 More significant declines have been recorded in industries such as energy (29.7% y/y), car manufacturing (13.9% y/y) or in petroleum-based manufacturing (25.6% y/y), including coke production.

"Currently in March, the Slovak industry produced 17.1% more value than the average monthly value in 2015. A year ago in March, it was 26.3% higher than the monthly average in 2015," the office said.

The positive impact was mainly due to the growth in the production of machinery and equipment by 3.9% and moderate growth in other smaller sectors of the Slovak industry.

UniCredit Bank Czech Republic and Slovakia analyst Lubomir Korsnak said the high annual decline in production of the automotive sector is a result of the high comparison base from March last year rather than the impact of the war in Ukraine. "The war should cut the automotive sector's output more significantly in April," he said, as quoted by the Slovak News Agency.

However, Korsnak stressed the war in Ukraine has already been reflected in production of Slovakia's energy industry and partly also the refinery industry.

Slovenska Sporitelna analyst Matej Hornak said to the news agency that he expects Slovakia's industry in the upcoming months to be under the pressure of increased input prices, fluctuating stock exchange prices, especially in the case of energy or oil, as well as the consequences of disrupted supplier-customer relations.

"On the other hand, the April survey of economic sentiment showed that Slovak industrial producers have optimistic expectations regarding the future, which might indicate that they see supply and export market alternatives in the future even in these difficult times," he was quoted by the news agency as saying.

In 1Q22, industrial production went down by 1.8% annually.

Russians' attitudes towards the US have nose-dived to their second worst level on record.

Russia’s CBR slashes key rate to 11% ahead of schedule

The Central Bank of Russia held an unplanned ahead-of-schedule policy meeting on May 26, at which the board of the regulator slashed the key interest rate by 300 basis points from 14% to 11%.

Albania’s electricity generation fell in Q1, forcing the country to increase imports more than sevenfold at a time when prices are soaring.

Growth will be driven by tourism and construction, but slowed by sharply rising prices – inflation has already exceeded the central bank’s 3% target.

Polish retail sales grew 19% y/y at constant prices in April, the growth rate nearly doubling versus a gain of 9.6% y/y the preceding month.