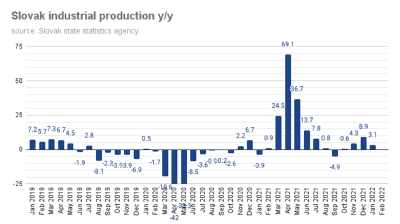 Slovakia's industrial production continued in its recovery, up by 3.1% year-on-year in January, shows data released by the Slovak Statistics Office. After seasonal adjustments, industrial output dropped by 1.2% month-on-month in January.

"The output of the vast majority of its branches decreased when compared to the end of last year. Only producers of consumer electronics saw a significantly slighter fall compared to December 2021. Consumer electronics producers added 1.4 percentage points [pp] to the y/y growth, as they were responsible for 44% of y/y industrial output growth," UniCredit Bank analyst Lubomir Korsnak was quoted by the Slovak News Agency as saying.

He added that the February confidence indicator in industry indicates that this recovery might have been of a temporary character.

“In January 2022, the manufacture of computer products contributed most to the overall increase in industrial output by 43%, which was the highest growth since May 2021. Production of rubber and plastic products increased by 13.3% and the production of electrical equipment by 11.5%,”  the office report read.

Industrial growth was negatively impacted by a decrease in electricity and gas supplies (down by 4.7%) and the manufacture of transport devices (down by 2.2%). Following an improvement in December, car production posted a moderate drop in January.

Korsnak pointed to the fact that the key automotive industry also failed to maintain strong year-end figures, its output falling by as much as 17% when compared to January 2020 before the coronavirus pandemic.

According to him, Russia's invasion of Ukraine has once again pushed energy prices up, which will prolong the period of soaring inflation in Europe. "Higher input prices, especially those of energy, might threaten the production of some less competitive segments of domestic industry, chiefly in energy-intensive sectors. High inflation will at first hamper the post-pandemic recovery of consumption in Europe and thus demand for consumer goods as well," he added, according to the news agency.

"We expect industrial output to start gradually declining in the upcoming months. Downward pressure on industrial production will be exerted both by the global materials crisis and the war in Ukraine, which is causing great uncertainty regarding the economic environment," noted 365.bank analyst Jana Glasova, as quoted by the news agency, adding that energy prices are expected to go further up if the war in Ukraine continues. This will lead to hampering industrial production, mainly in energy-demanding industries.