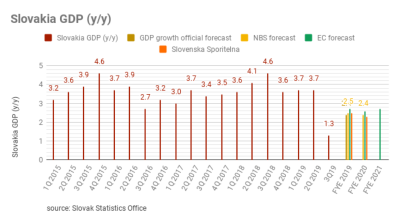 Slovakia's GDP increased by 1.3% year-on-year in the 3Q19, far below expectations, driven mainly by lower foreign demand. Growth increased by 1.8% y/y after seasonal adjustments, and by 0.4% quarter-on-quarter, according to preliminary data published by the Statistics Office on November 14.

“Slovakia's economy decelerated significantly for the second time this year, and it seems that the economic slowdown in the Eurozone, particularly in Germany, has been affecting it strongly,” said VUB Banka analyst Michal Lehuta, the Slovak News Agency quoted.

According to Slovenska Sporitelna bank analyst Katarina Muchova, Slovakia's GDP growth could drop to 2.5% y/y in 2019 and to 2.3% in 2020, or even lower due to uncertain developments in industry and foreign trade.

She also stressed a possible negative impact of external threats to Slovakia's economic performance, most notably Brexit, a slowdown in Germany, the Eurozone and China.

Russia's GDP fell by 8.5% in 2Q20 due the lockdown quarantine measures

Russia's GDP fell by 8.5% in 2Q20 due the lockdown quarantine measures imposed across the country reeling from the coronacrisis.

Romania's exports contracted by 33.5% y/y to €11.5bn in the second quarter of the year, but monthly data reveals a gradual recovery.

Racked by anti-government protests and with rising new COVID-19 cases, Bulgaria’s lacklustre retail and industrial production data indicate the hoped-for recovery is not yet in sight.

Russia's GDP fell by 8.5% in 2Q20 due the lockdown quarantine measures
9 hours ago
Ukraine’s consumer inflation stayed at a 2.4% y/y level in July
16 hours ago
Romania’s exports continue recovering in June
1 day ago
ING analysts warn of L-shaped recession in Bulgaria
1 day ago
Guest nights in Hungary dropped by 75% y/y in June
2 days ago