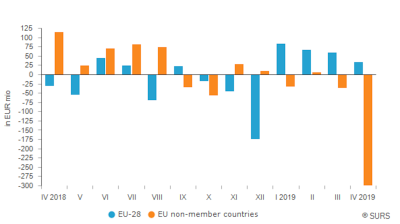 Slovenia’s deficit in its external trade in goods reached €278.2mn in April 2019, as import growth exceeded that of exports, the Republic of Slovenia Statistical Office said on June 7.

The deficit in April was only the fifth recorded in the last 10 years, and was also the highest of all recorded April deficits. The export/import ratio in April was 91.0%.

Slovenia has an export oriented economy, but as salaries have increased recently in line with the tightening labour markets in the CEE region, and as a result so has consumption, exports have not kept pace with the rise in imports. According to the European Commission, which recently downgraded its 2019 growth forecast for Slovenia, domestic demand will be the main driver of growth this year as the external environment weakens.

The hike in the deficit in April was greatest with non-EU countries, where Slovenia recorded a much higher growth in imports than in exports in April.

“This was the first April deficit in the last ten years, which was also the largest monthly deficit by value in the same period,” the statistics office said.

Outside the EU, Switzerland was Slovenia's most important trading partner.

Slovenia also reported an external trade deficit in the first four months of this year, amounting to €128.2mn, while the export/import ratio was 98.9%.