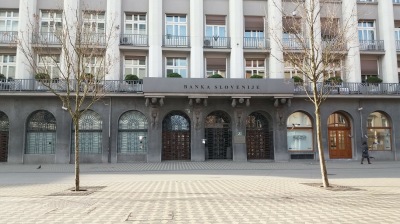 Slovenia’s economy could contract by between 6.2% and 16.1% in 2020 due to the huge consequences expected from the outbreak of coronavirus (COVID-19), the central bank said on March 31.

The Bank of Slovenia said it has prepared three possible scenarios which do not take into account the economic measures of the government to curb the economic damage. The government approved a €3bn economic package to mitigate the effects of the coronavirus crisis on economy, which is expected to be endorsed by the parliament on April 1.

Slovenia's private consumption is also expected to decline this year in the catering and hotel services, transport, recreation and cultural sectors, the Bank of Slovenia said.

The impact on the labour market will also be significant whereas the annual drop in employment is projected at 1.8-4.7% in the absence of measures, while the jobless rate could more than double.

The final effects on the labour market will depend in particular on the effectiveness of the proposed measures to mitigate the effects of the crisis.

Due to the economic contraction, Slovenia’s sovereign debt is expected to increase to between 70% and 80% of GDP.

Slovenia has so far reported 802 coronavirus cases and 15 related deaths.

Romania's finance ministry tapped the international markets on July 7, selling $3.3bn worth of Eurobonds denominated in US dollars with maturities of 10 and 30 years. Romania previously issued ... more

Slovenia’s SID Bank successfully issued COVID-19 bonds worth €350mn on international capital markets, the bank announced on July 2.  The state-owned bank will use the funds raised to help ... more

A social media storm blew up in Turkey after the country’s fourth-largest lender, VakifBank, appointed to its board a former Olympic wrestling star who serves as an adviser to President Recep ... more