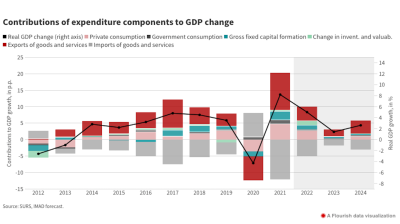 Slovenia’s Institute of Macroeconomic Analysis and Development (IMAD) said on September 15 it upgraded its GDP growth projection for the country this year by 0.8 of a percentage point (pp) to 5% despite the crisis.

The central bank said earlier this month that with ongoing Russian military aggression in Ukraine and the resulting sanctions it expects slightly lower, but still solid GDP growth in for the rest of the year compared to the previous period. The Slovenian economy expanded by a real 8.2% y/y in the second quarter of 2022, following a 9.8% y/y growth in Q122.

The projection for 2022 was upgraded mainly due to higher growth in private consumption and the high contribution of inventory changes in the first half of the year.

“In the second half of the year, we expect a slowdown in the export part of the economy, which is indicated by the deterioration in confidence indicators in the summer months, while forecasts of international institutions have also deteriorated since the spring,” IMAD said.

However, the GDP forecast for 2023 was considerably downgraded to 1.4% from 3% in the spring forecast.

The downgrade will largely result from developments in the second half of the year. In the first half of 2023, value added in manufacturing and merchandise exports will still be affected by lower growth in foreign demand, lower gas consumption and still high prices.

The autumn projection was prepared under conditions of great uncertainty, related to the situation on the energy markets, which is worsening as the war in Ukraine continues, affecting Slovenia's trade partners.

Slovenian government to hike spending over next two years

bneGREEN: Fit for 55 – not fit for purpose
More pain stored up for Emerging Europe in 2023
Slovenian government to hike spending over next two years

Russia’s industrial output decline slows to only 0.1% in August
2 days ago
Poll shows Putin's popularity took hit in September but remained as high as 77%
2 days ago
Russia on track to have a record-smashing grain harvest
4 days ago
Bosnia posts annual CPI inflation of 16.8% y/y in August
4 days ago
IMF sees Romania’s economy growing by 4.8% in 2022, analysts are even more bullish
5 days ago