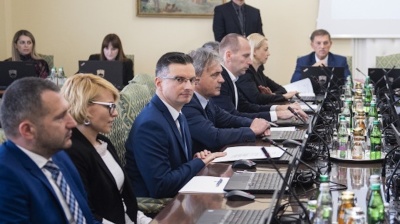 By Valentina Dimitrievska in Skopje January 27, 2020

Slovenian Prime Minister Marjan Sarec announced on January 27 that he is resigning to open the way for early general elections, as he has been unable to implement substantial reforms with the current minority government.

Sarec quits at a time when the governing coalition of five centre-left parties faces obstacles while trying to adopt bills in the parliament.

The government led by Sarec took power in September 2018, having only 43 out of 90 seats in the parliament, but with the informal support of the Left Party (Levica). However in November 2019 it also lost support of the opposition Left Party, making it difficult to pass crucial bills in the assembly.

"With only 13 MPs and this coalition I cannot fulfill people's expectations, at this moment, but I can fulfill them after the elections," Sarec said in a statement.

Sarec, an ex-actor and comedian, said he will send his resignation to the parliament later today and called for snap elections.

Regular elections in Slovenia are due to take place in mid-2022.