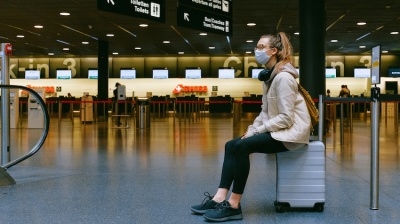 Small countries in the Balkans and South Caucasus are the most exposed to the expected collapse in tourism revenues this year as the coronavirus (COVID-19) pandemic puts a stop to international and domestic travel.

In several of the countries in these sub-regions tourism accounts for some of the largest shares of GDP across the wider Central, Eastern and Southeast Europe and Eurasia area, based on a global survey by the World Travel and Tourism Council (WTTC) published in 2018. 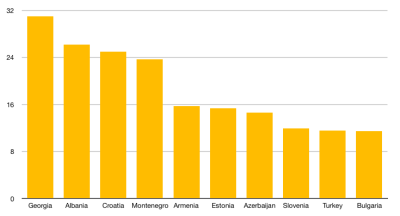 The top countries in Central, Eastern and Southeast Europe and Eurasia ranked by the total contribution of tourism to GDP. Source: WTTC

Looking only at the direct contribution of the tourism sector to GDP, the largest share is in Montenegro (11%), followed by Croatia (10.9) and Georgia (9.3%). 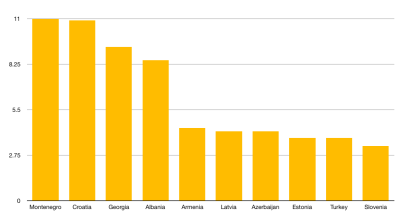 The top countries in Central, Eastern and Southeast Europe and Eurasia ranked by the direct contribution of tourism to GDP. Source: WTTC

In Turkey, one of the wider region’s largest economies, the WTTC put the contribution of the travel and tourism sector at 11.6%, though other estimations put it considerably higher at as much as 20%. In absolute terms, the WTTC valued Turkey's tourism sector at $94bn in 2017.

Ratings agency Moody’s said on March 25 that it expects Turkey’s economy to be the hardest hit out of all the G20 economies from the impact of the coronavirus economic shock, with a cumulative contraction of 7% in this year’s second and third-quarter GDP. "The shock will likely take a large toll on Turkey’s tourism-related sectors through the summer,” the ratings agency commented.

Two days earlier, Capital Economics cut its 2020 GDP growth forecast for Turkey to a contraction of 2%, noting that Turkey is particularly vulnerable to the damage that will be caused to the tourism industry with so many countries introducing near-total bans on commercial flights and holidaymakers cancelling their vacations in their droves.

At present, with the coronavirus spreading rapidly around the globe, populations in numerous countries are under lockdown and strict limits on travel, especially international travel, have been imposed.

Airlines are cancelling flights, with Wizz Air, for example reporting on March 24 that it is operating at just 15% of capacity. The airline said grounding all its planes was a “distinct possibility”, as further travel restrictions and social distancing policies could make international flying for commercial purposes “either untenable or impossible”.

Other airports and carriers have already completely or almost completely suspended traffic. The airports in Belgrade and Ljubljana were both temporarily shut, with Serbian flag carrier Air Serbia only operating rescue flights for Serbians stranded abroad. Romanian national carrier Tarom has suspended internal flights for 14 days as well as flights to and from the countries with the largest coronavirus outbreaks.

It is also virtually impossible for would-be holidaymakers to plan ahead to the summer break, as no one can predict accurately how long it will take for the virus spread to peak and for restrictions to be lifted. Booking a holiday is the last thing on many people’s minds.

A report from think tank the Centre for European Reform forecasts that while manufacturing demand is likely to rebound after restrictions are lifted, the same cannot be sad for the services sector. “Here, the recovery will be weaker than in manufacturing: a cancelled restaurant visit, concert or holiday trip will rarely be rescheduled,” it said in a report titled “The two economic stages of coronavirus” published on March 26.

Economists trying to make some sense of the future admit that growth projections for this year hinge on whether lockdowns are lifted soon enough for there to be a return to normal economic activity in the second quarter, or if the current situation will persist for months.

In countries where tourism makes up a large share of GDP, governments have sought to target the industry specifically as they draw up economic stimulus plans to try to mitigate the fallout from the pandemic.

In Croatia, for example, the stimulus package worth around €4bn approved earlier this month includes measures to support companies in the tourism industry as well as those aimed at the economy as a whole.

Under Georgia’s stimulus package all enterprises linked to the tourism sector will be granted income and property tax breaks until November 1, while a refund of value-added tax (VAT) for companies would be doubled to GEL1.2bn ($347mn) from GEL600mn. Individuals and tourism-related companies could be permitted to defer interest payments on bank loans for four months.

OUTLOOK 2021 Azerbaijan
CAUCASUS BLOG : What can Biden offer the Caucasus and Stans, all but forgotten about by Trump?
LONG READ: The oligarch problem

The National Bank of Ukraine (NBU) has declared that it agreed not to adjust its main policy rate at its monetary policy board meeting on January 21, holding it at 6%.

Pandemic pushes public debt close to 80% of GDP in Albania and Montenegro
11 hours ago
Polish industrial production continues boom in December
19 hours ago
Slovenia’s economic sentiment indicator up 2.2 pp m/m in January
16 hours ago
National Bank of Ukraine retains a key policy rate at 6%, the outlook of the CPI deteriorates
3 days ago
Russia's National Welfare Fund accounts for almost 12% of GDP
3 days ago