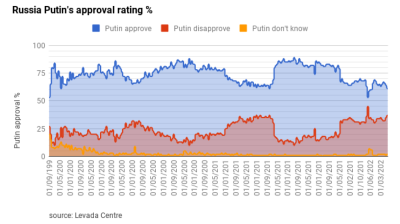 The approval rating for Russian President Vladimir Putin has taken a hit in the last two months, falling from 66% in June to 61% in August.
By bne IntelliNews August 30, 2021

The approval rating for Russian President Vladimir Putin has taken a hit in the last two months, falling from 66% in June to 61% as of August and with 37% disapproving, according to independent pollster the Levada Center – his worst result since May last year when the pandemic struck.

Analysts are expecting the rate to recover somewhat in September, after Putin announced a $5bn one-off payment of RUB10,000 per pensioner in the run-up to the September election and RUB15,000 for service men.

The approval rate for Prime Minister Mikhail Mishustin was a lot more stable, sliding by only 1pp in the last two months to 53% and with 42% disapproving – a result that is consistently higher the mid30s Mishustin was scoring when first appointed.

The rating for the government has also slid 1pp to 46% that approve against the 51% that disapprove.

The regional governors have also taken a blow, with their approval rate falling below 60 for the first time since March 2019 in the last three months to 57% that approve in August and 38% that disapprove. This result should be especially worrying for the Kremlin, which is relying on the regional governors to deliver on bringing in the vote in September’s elections.

Doubly worrying is the approval of the State Duma, which has fallen to 37% in August with 59% disapproving of its work. The majority of Russians have always disapproved of the Duma, which has never managed to command a majority approval, but the current rating is only the second time that its approval rate has dropped below 40 in the last two years. (The previous time was only two months ago in June.) The ruling United Russia will be going into the election fight with its hands tied behind its back.