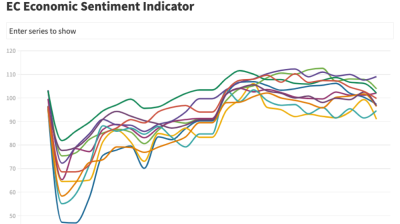 The headline index fell by 4.9 points to stand at a twelve-month low of 108.5, as Russia's invasion of Ukraine takes a sharp toll on economic sentiment in Europe. / bne IntelliNews
By bne IntelliNews March 30, 2022

European economic sentiment took a hit in March, falling in seven of the ten most important economies, as the war in Ukraine and the economic impact of extreme sanctions on Russia drive up inflation and disrupt supply chains, according to the latest numbers released on March 30.

“As widely expected, today's Economic Sentiment Index (ESI) reading for the Eurozone followed other prominent surveys lower in March. The headline index fell by 4.9 points to stand at a twelve-month low of 108.5, providing further evidence that the Russian invasion of Ukraine is taking a sharp toll on economic sentiment,” said Ricardo Amaro, senior economist at Oxford Economics, in a note.

In the front line are Czechia, Bulgaria and Latvia, which saw the biggest falls in business sentiment. Those countries are exposed to trade with Russia and rely on inputs that are now not arriving.

“The March decline was broad-based. From the ESI's five constituent parts (covering cross-sectoral business sentiment as well as consumer confidence), only services didn’t fall in March as the sector is likely having some respite amid the re-opening of economies,” said Amaro.

The most important Russian import to Czechia is iron; Russian iron makes up 80% of the latter's total iron imports. That is already having knock-on effects for the Czech automotive industry, where a third of firms are already reporting shortages of inputs that will slow industrial production.

Russian inflation, especially food inflation, is also a drag on growth. The war in Ukraine is expected to add 2% to headline inflation this year and central banks across the region are already aggressively hiking rates. Hungary’s central bank put in an early hike to 8% in February and Poland has hiked to 6%. The Czech central bank is anticipated to hike as well at its next monetary policy meeting.

“Consumer confidence dropped the most in Czechia and Hungary, but eased only slightly in Poland (in contrast to the sharp decline in the measure produced by Poland’s Statistics Office) and rose in Croatia. The falls in confidence will take some of the shine off consumer spending in March and the start of Q2,” Liam Peach, emerging markets economist at Capital Economics, said in a note.

Rising oil prices are not only fuelling inflation, but they are also swelling current account deficits and if crude stays at around $120 per barrel they are expected to add $20bn to the cost of fuel this year.

Countries that are doing better are Slovakia, Croatia and Bulgaria, which all saw modest increases in sentiment in March. However, sentiment is likely to stay depressed, or even fall further, in the second quarter, when the main shock to economies across the region will start to be visible. And business people know the shock is on the way.

“Sentiment in the services and retail sectors fell sharply in Poland. Falls in construction sentiment were generally small in the major economies of Poland and Romania, but particularly large in Lithuania and Latvia,” says Peach. “One surprising result is that while industrial sentiment fell sharply in Czechia, it did not fall very far in Poland and Hungary, and actually rose sharply in Slovakia to a six-month high. This seems to reflect a rise in production expectations, but industrial sentiment is likely to weaken further across the region into Q2 as the extent of supply-chain disruptions from Russia and Ukraine become clearer.”

Russian economy stable in May, but demand and income contraction deep
2 hours ago
CEE Economic Sentiment Indicators fall on polycrisis woes
5 hours ago
Europe’s gas storage on track to meet 80% full by start of heating season
1 day ago
Kosovo’s population dropped to 1.77mn in 2021 as emigration outweighed natural increase
1 day ago
North Macedonia’s PPI jumps 21.7% y/y in May
1 day ago