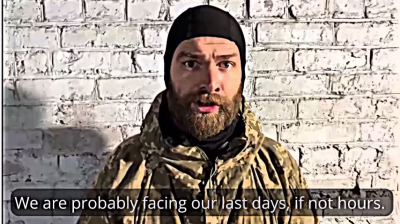 Azov commander Sergiy Volyna was one of the last 500 Azov fighters to surrender to Russian forces, bringing the two-month-old siege of the Azovstal steel works to an end. / wiki
By bne IntelliNews May 20, 2022

The month-long siege of the Azovstal metal works in Mariupol is over after the remaining members of the Azov fighters surrendered and Russian forces took complete control of the almost totally destroyed sprawling plant that has become an icon of Ukraine’s heroic resistance to the Russian invasion.

“The territory of the Azovstal metallurgical plant … has been completely liberated,” the Russian defence ministry said in a statement. It said the group that had given up comprised 531 people.

At a news conference by a group of family members in Istanbul, Natalia Zarytska, wife of an Azovstal fighter who had surrendered, said she had not heard from her husband since a 10-minute message exchange on Telegram two days ago.

“So my husband messaged me two days ago and the situation is really hard and horrible and my husband is on the way from one hell to another hell, from Azovstal steel plant to a prison, to captivity,” Zarytska said.

Russian Defence Minister Sergei Shoigu said that almost 2,000 Ukrainian soldiers in Azovstal had surrendered so far. Ukrainian officials have not confirmed that number and Reuters has not been able to verify it.

The resistance broke earlier this week when a deal was struck between the defenders and the remaining forces to end hostilities. A total of 1,730 soldiers, including the wounded, gave themselves up to waiting Russian forces on May 18 and were driven in buses to detention centres in Russian-controlled Donetsk and Novoazovsk, where those that needed it were also promised medical treatment.

Ukrainian President Volodymyr Zelenskiy later called for the end of the siege, saying in his daily nationwide address: "A difficult day. But this day, like all others, is aimed at saving our country and our people. I want to emphasise that Ukraine needs Ukrainian heroes alive."

However, that same evening Azov regiment’s deputy commander Sviatoslav “Kalyna” Palamar posted a video on social media where he said many soldiers were still at Azovstal and that “a certain operation is underway”, but he didn’t give details. At the time an estimated 500 soldiers were thought to still be in the catacombs that run under the plant.

“The higher military command has given the order to save the lives of the soldiers of our garrison and to stop defending the city,” the commander of the regiment, Denys Prokopenko, said in a video on Telegram.

Prokopenko also said that civilians and heavily wounded Ukrainian fighters had been evacuated from the Azovstal steelworks in Mariupol.

“We have constantly emphasised the three most important conditions for us: civilians, wounded and dead,” Prokopenko added.

“The civilians have been evacuated. The heavily wounded received the necessary assistance and they were evacuated, to be later exchanged and delivered to territory controlled by Ukraine,” Prokopenko said.

It remains unclear how many of the Azov soldiers were lost in the defence of the metal works. According to some estimates 3,500 Azov fighters arrived in Azovstal at the start of the siege, which suggests up to 1,000 Azov fighters were killed or captured during the siege.

Prokopenko suggested that part of the talks with the Russians included assurances that they could recover their dead and deliver their bodies home to their families.

“I hope that in the near future, relatives and Ukraine will be able to bury their soldiers with honour,” he said.

The Russian Ministry of Defence says a total 2,439 Ukrainian soldiers have now surrendered from Azovstal, including the final 500 diehards who held out to the last.

It is not clear what will happen to the Ukrainian soldiers now. They are being held in Russian-run detention centres for now as POWs but their propaganda importance means their fate will almost certainly become the subject of intense political wrangling.

The wives of the soldiers have already first called on Turkey to broker an international humanitarian effort to evacuate them and the reported 3,000 civilians that were also sheltering in the metal plant for much of the siege, with some success.

Zarytska and two other wives and a mother of Azovstal fighters have been in Turkey this week to ask the country to help secure the safety of the fighters at the steel plant.

Kyiv has offered a prisoner swap to return the fighters to Ukraine, while some senior Russian lawmakers have already called for some of the soldiers to be put on trial for war crimes and accused them of being Nazis.

The Azov Battalion was active in the EuroMaidan revolution and has long been accused of close ties with far-right groups – the basis of Moscow’s claims that the 2014 Revolution of Dignity was actually a right-wing coup d'état that formed an illegitimate government the Kremlin has refused to recognise.

The Azov Battalion is a paramilitary organisation that makes blatant use of Nazi symbolism but has co-operated with the government and was subsumed into Ukraine’s armed forces after the post-Maidan government was formed. It claims that it has purged itself of extremist elements.

The end of the siege will be a big propaganda coup for Russian President Vladimir Putin, who has been desperate for some successes as the war in Ukraine drags on with no end in sight.

After one catastrophe after another the pendulum seems to have swung back towards Russia in the last few days. Ukrainian troops pushed right up to the Russian border earlier this week, putting them into artillery range of key Russian supply lines into Ukraine, but in the last two days Russian forces have recaptured the borderlands and reintroduced a buffer that protects their lines of supply. Russia has also made gains in the southern coast region, consolidating its control over the land bridge that runs from the Russian western border down to the Crimean Peninsula. The capture of Mariupol completes that process, as it was a key strategic city close to the Russian border in the south-eastern corner of the country.

However, the main fighting is going on around Luhansk and the town of Severodonetsk, where a brutal battle has been raging for control of the key city for the last two days, and Russia has reportedly been making gains. Russian forces are attempting to take full control of the entire Luhansk region, most of which remains under Kyiv’s control.

Defence Minister Shoigu reported to President Vladimir Putin the “complete liberation” of the Azovstal steelworks in Mariupol – the last stronghold of Ukrainian resistance – and the city as a whole, spokesman Igor Konashenkov said.