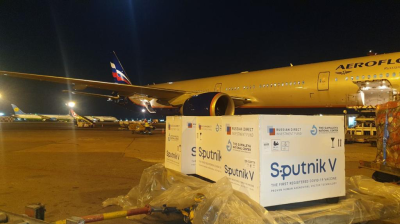 Russia has been earning signifcant brownie points by supplying its Sputnik V vaccine to developing countries that can't afford, or simply can't get hold of, the Western-made alternatives. / wiki
By Ben Aris in Berlin April 28, 2021

A plane carrying the first 50,000 of a million doses of the Sputnik V vaccine arrived in Tashkent in late April. But on the same day Brazil announced that while it deemed the vaccine safe it had no plans to buy the medicine, despite the fact the epidemic is raging out of control in the country.

Welcome to the vaccine wars. Brazil is widely believed to have turned down an offer to buy the cheap and efficient vaccine after being put under pressure from the US State Department not to do a deal. The US appears to be afraid of the soft power wins Russia has been scoring by helping poorer countries around it get the desperately needed medicine while the rich world hoards its own supplies.

However, both medical regulators in Brazil and Slovakia have called these claims “fake news” and that they have not received enough data from Russia to complete the certification process.

At the same time Argentina’s health ministry said on April 27 that Russia’s Sputnik V vaccine is more effective at preventing coronavirus infections than its Chinese and Indian competitors, and last week Hungarian medical authorities said that Sputnik V was the “best” of all the vaccines on offer.

US President Joe Biden boasted that more than 200mn people in the US have now been vaccinated and it has been reported that the US supplies are enough to vaccinate its entire population at least twice over, but Biden said the US is “not ready” to consider selling some of its excess supplies to countries less fortune than itself yet. Moreover, US pharmaceutical companies have been accused both of leaning on the US State Department to threaten countries that try to knock off their vaccines with cheaper counterfeits and of profiteering with sharp price increases in recent months that will earn them billions of addition dollars.

Moscow last month accused the US officials of trying to dissuade Latin American countries from accepting aid from “ill-intentioned states”, including Russia.

The EU is also apparently dragging its heels. The Russian Direct Investment Fund (RDIF) that is behind the production of the Sputnik V vaccine applied to the European Medical Agency (EMA) on March 4 to gain approval for its vaccine, but the process has been dragging on. An official said the process will not be complete until the end of May and doesn't appear to have been fast-tracked, despite a crisis in the EU, and Germany in particular, due to a botched procurement plan that has left the most populous country in Europe without anywhere near enough of the drug – and Germany is the country that invented it.

German Chancellor Angela Merkel said this week that if Sputnik V is not approved soon there will be a point where there will be no need to order it due to a surge in production by rival vaccines. EMA inspectors are currently in Moscow trying to finalise the process.

The questions as to Sputnik V’s safety and efficacy were laid to rest by a peer-reviewed report in leading British medical journal The Lancet in February that confirmed the Russian drug was safe and had an efficacy rate of over 91% .

At the same time, the Russian inoculation programme continues, with its availability being thrown open to anyone that wants it; there are free vaccination stations at most malls, where you can walk in off the street and get the jab with no waiting.

However, Sputnik has also been dogged with a smear campaign. Hungary, the only EU member that is distributing the Russian vaccine, released a report last week that named Sputnik V as the “best” of the drugs on the market, yet the international press raised doubts over its safety and statistics when it first appeared. That campaign continues with a New York Times report  that claimed Russia was exporting Sputnik V to other countries to win political kudos “at the expense of its own population.” That comment caused a storm of comment on social media, pointing out there were plenty of vaccines available. The slow take-up has been more of a result of the traditional wariness of vaccines in Russia and by the fact that because so many people have caught the virus, demand is low; Moscow Mayor Sergey Sobyanin says that half of the capital’s population have already been infected.

Russia has vaccinated 11.9mn people with a first dose of one of its three homemade coronavirus vaccines, Deputy Prime Minister Tatiana Golikova said April 26, or some 10% of the population, since the mass inoculation programme was launched in December. A total of 7.5mn Russians – 6.5% of the country’s adults – have received both doses of a vaccine, Golikova added.

Putin said Russia is aiming to achieve herd immunity by autumn 2021. But at the current pace of vaccinations, the country is only on course to have fully vaccinated 70% of its population by August 2022.

With the developed world representing some 15% of the global population but hoarding an estimated 50% of available doses, Russia has stepped into the breach.

The RDIF has been actively touring the world and doing deals to make the Russian vaccine widely available. Moreover, at a production cost of around $10 a dose it is one of the cheapest of all the alternatives. And it comes with the added bonus of being able to be stored at almost room temperature, unlike several Western versions that have to be kept at temperatures as low as -70C, making logistics complicated and expensive.

Russia has earned itself significant soft power brownie points from its efforts, which have also been pragmatic. With an underdeveloped pharmaceutical industry – although Russia has sophisticated scientific research capabilities thanks to its work on polio and the Ebola virus – the RDIF has been setting up local production in client countries, transferring the technology and even providing finance.

Business people have been getting into the act too. Russian metals and tech tycoon Alisher Usmanov offered to pay for half of the one million doses that just started arriving in Uzbekistan to kick off the mass vaccination programme in Central Asia’s most populous country, Uzbek President Shavkat Mirziyoyev said in February, when Sputnik V was approved for use by government authorities.

The RDIF has done deals and won approval for Sputnik in over 60 countries around the world including in Asia and Africa, and built factories in multiple countries, including Turkey and Belarus. Yet the vaccine is still not approved for use in Europe or the US.

Low base and pre-election handouts lift Hungary's GDP growth by 8.2% y/y in Q1