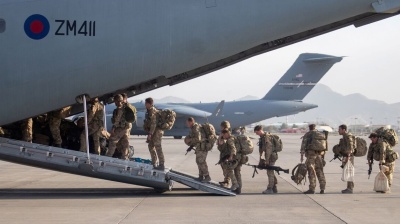 With the final departure of Western nations' troops from Afghanistan, an attempted mass exodus of Afghans not prepared to risk Taliban rule may begin.
By bne IntelIiNews August 31, 2021

Recent days may have seen up to 7,000 refugees per day from Afghanistan crossing a largely unpoliced 980-kilometre (608-mile) border into Iran, according to NGO workers.

Fatemeh Ashrafi, chair of the (HAMI), discussed Iran’s little-known difficulties with a sizable Afghan migrant and refugee wave with Iranian daily Etemad. The number of Afghan refugees in Iran has in recent times fluctuated between 3mn and 4mn people, she said, adding that only one-third had legal residency permits.

Ashrafi also said : “If we take into account the per capita tuition fee of $600 per student a year, multiply this $600 by the number of Afghan students studying in public schools (500,000), [we get] a figure of more than $300m. The contribution of international aid in this area is less than $5m a year.”

She added: “Up to 500,000 people [from Afghanistan] entered Iran in the last four months. In the last month, there have been 15 full flights from Afghanistan to Iran every week. Of course, the people who came to Iran with these flights have entered Iran with tourist and pilgrimage visas, and many times these people have entered from the land borders and often [illegally] in the form of smuggling. This number has been rising at the same time as the Taliban are advancing in Afghanistan, so that after the Taliban took control of Kabul, according to relevant sources, it has reached more than 7,000 people a day through illegal channels.”

Afghan Shias and Hazaras, a Farsi-speaking minority, formed the initial waves of refugees, but more lately “this mix has shifted significantly towards Sunni and Pashtun-speaking Afghan”, partly because of Pakistan expelling some of the refugees inside its borders, Ashrafi said.

Europe appears intent on avoiding an influx of migrants on the scale of 2015—when the Syrian Civil War caused a massive movement of displaced persons, many of whom reached Germany and other European countries via a route that took them through Turkey—but with some Afghan borders left in a porous state, many Afghans fleeing Taliban rule may be encouraged to take their chances. If a massive number of Afghans reach Europe, the issue would cause huge political rows, with the 2022 presidential election in France certain to produce one big flashpoint. The migration events of six years ago are seen as having reshaped global politics.

Turkey, which already hosts the world’s largest refugee population, has said it is working at pace to seal its 534-km border with Iran with a modular wall, but observers doubt it will prove effective. The country’s Erdogan administration, meanwhile, is under pressure from most Turks not to become host to millions of additional Afghans, to add to the millions of Syrians it has allowed into Turkey. Central Asian nations likewise are determined not to become the solution to the problem of where great numbers of Afghan refugees can settle.

In the meantime, Europe has been offering countries neighbouring Afghanistan millions in aid if they agree to temporarily host at least tens of thousands of Afghan refugees, prior to security checks that would greenlight them for transit to Europe and the US. Pakistan is another bordering state that has set its face against taking in more permanent refugees from Afghanistan.

So far there has not been an overwhelming movement of Afghans towards the borders, but Bob Kitchen, director of emergency response at International Rescue Committee, told Slate on August 31 that “all eyes are on the Kabul airport right now. Once the 31st arrives [bringing with it the end of the international airlift of people out of Afghanistan], we’ll see what other routes and options people take and may also see what the Taliban’s intentions are”.

German Foreign Minister Heiko Maas has in the past week travelled to Turkey, Uzbekistan, Pakistan and Qatar in an effort to arrange cooperation on processing refugees. Maas, in Islamabad, said the EU was providing €100m in aid and Berlin €500m to countries neighbouring Afghanistan to assist with border management and fighting extremism. The Central Asian nations in particular are anxious that jihadist terrorists could infiltrate their region posing as refugees.

Germany has so far pledged to take more than 40,000 people escaping Afghanistan.

It added that “any attempts to cross the border, regardless of their reasons, will be suppressed in accordance with the legislation of Uzbekistan”.

The ministry also said that it was seeking clarification on how a scheme in which it would temporarily host and process Afghan refugees designated for specific European countries would work. Turkmenistan has flat out resisted opening its border to refugees, saying it would risk difficulties with COVID-19.

Pakistan’s foreign minister, Shah Mahmood Qureshi, said: “This is a pivotal moment in Afghanistan’s history. The international community must remain engaged. Humanitarian aid must flow. Do not let an economic collapse in Afghanistan  take place. A vacuum is in nobody’s interest. Instability is in nobody’s interest. An exodus of refugees cannot be stopped within the region”.