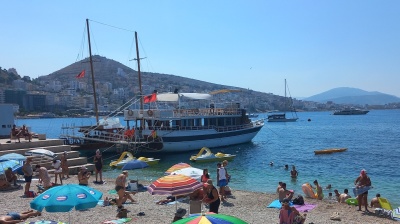 A party boat docks among holidaymakers on City Beach in Saranda, one of Albania's top tourist destinations. / Clare Nuttall
By Clare Nuttall in Saranda August 20, 2022

On City Beach in Saranda it’s hard to find a space to lay down a towel among all the others on the stony beach, whose owners are either stretched out soaking up the sun or bobbing about in the clear sea water. Alongside local people who head down to the beach for a quick swim after work, are many tourists from nearby Greece, Albania’s former Yugoslav neighbours and, these days, from other parts of Europe.

Long a popular destination among East European seeking a cheap beach holiday, Albania is increasingly on the radar of travellers from further afield. With holidaymakers squeezed like everyone else by inflation and the rising cost of living across Europe, its reputation as a budget destination has become a major selling point.

Social media video site TikTok has recently been flooded by videos extolling the benefits of Albania as a holiday destination — with a focus on its beaches, cheap but stylish bars and Unesco heritage sites, a trend first picked up on by The Times. One tour guide’s video of Ksamil, a popular seaside village close to Saranda, has received over 60mn views on TikTok.

With the coronavirus (COVID-19) restrictions on international travel finally lifted this summer, Albania was already expecting a revival in tourism to lift its economy this summer. However, the scale of the rebound has taken people by surprise.

“This year is surprising, because we have an unexpected number of tourists … Our forecast was 2.9mn entries in Albania, and in fact by the end of the year we will have exceeded 4mn,” Rama said in a Q&A published on the government website on August 15.

“I think there are still some things missing, but we are on the right track. The place is small, beautiful and welcoming. The food is good and you can eat well everywhere, both in big restaurants and on the street. Many Albanians have returned to the country after working in Italy in the food industry, and this has had a very positive effect,” he added.

Data already released by statistics office Instat for June showed foreign citizens’ arrivals in Albania were up by 45% year on year, reaching 876,056. In January-June, foreign arrivals reached almost 2.6mn, up by 51.3% y/y.

The top source country for visitors was neighbouring Kosovo, accounting for 394,327 of the total in June, followed by North Macedonia (76,373). Visitors from both countries increased compared to the same month of 2021.

However, much stronger growth was seen in tourist arrivals from several other countries, with the number of visitors from Greece, Spain and the UK more than doubling compared to June 2021.

Many of those on the beach and seaside cafes in Saranda are members of Albania’s huge diaspora, returning to their home country for the summer holidays. One family said they had flown over from London after two years staying away due to the pandemic.

Efforts to develop tourism infrastructure and bring even more visitors to Albania are ongoing.

Until recently, there was only one international airport in operation, Mother Teresa International Airport in the capital Tirana. Last summer, however, the revamped Kukës International Airport was opened, and plans to build new airports in tourism hotspots Saranda and Vlora are underway — despite strong opposition to the planned Vlora airport from environmental groups who want the location moved from a protected wetland area.

The Albanian government aims to create the country’s first ski resort at Korça, Prime Minister Edi Rama said during a visit to the city in 2021. The city has already experienced continuous development of its tourism offering in recent years, with the opening of many new hotels.

Another project is the new Durres Tourist Port, one of the largest tourism-related industry investments in Albania, that will replace the old industrial port in front of the city, which will be moved further away.

On a smaller scale, there have been many local investments to make tourist destinations more appealing. Saranda, for example, now has a smart new boulevard along the shore, complete with shady trees, benches and children’s play equipment, a project funded by the World Bank. This is where local families and tourists alike promenade when the temperature falls in the evenings.

However, there is still a lot to be done, as the influx of hundreds of thousands of tourists strains the infrastructure of the Albanian coastal towns and villages. Overall, Albania has a pressing need to invest into infrastructure, from transport to energy to municipal infrastructure.

Waste management is another issue. As in other Western Balkan countries waste generation has increased sharply in recent decades, but waste management infrastructure has in general failed to keep up. Littering is a major problem, so bad that the army is typically brought in to clean up the country’s beaches ahead of the summer tourist season. Recent efforts to tackle the issue include a ban on single-use plastic bags.

Safely is another concern. This summer, three beachgoers were killed when they were hit by speedboats or jetskis, which veer dangerously close to swimmers on many of Albania’s beaches. The death of a seven-year-old girl, who was fatally hit by a speedboat in August, sparked protests, with people blaming the state authorities for failing to ensure such accidents do not happen.

Yet even with those challenges, those in the industry have long believed there is huge potential to broaden the types of tourism on offer away from the traditional package holidays. Aside from Albania’s Unesco World Heritage sites at Berat, Butrint and Gjirokastra, there is also potential for adventure tourism, nature destination, rafting, hiking, riding and other types of holiday, tourism professionals have told bne IntelliNews.