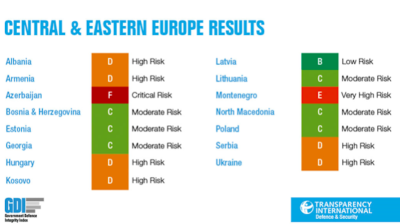 Anti-corruption watchdog Transparency International (TI) has warned of the high risk of corruption in Central and Eastern Europe (CEE) countries’ defence sectors that has increased as governments step up defence spending.

The Government Defence Integrity Index (GDI) compiled by TI for 15 countries in the region shows that more than half have a high risk of corruption in their defence and security sectors.

According to the report, region-wide issues including weak parliamentary oversight of defence institutions, secretive procurement processes and concerted efforts to reduce transparency and access to information raise the risk of corruption and poor governance.

The problem has worsened with the rising military spending in the region that includes several of the newer Nato members, concerned about the rising tensions between their near neighbour Russia and western powers. Countries in the region spent $104bn on defence and security in 2019, including $65bn spent by Russia.

“Whilst defence governance standards in Europe are some of the most robust globally, states in Central and Eastern Europe and the Caucasus, where a combination rising defence budgets and challenges to democratic institutions, are particularly vulnerable to setbacks to their recent progress in governance and development,” said the report.

Since Donald Trump was elected president of the US four years ago, Nato members have been under pressure to meet their commitment to spend 2% of GDP on defence. Among the region’s Nato members, between 2010 and 2019, Lithuania and Latvia increased military spending by 232% and 176% respectively, and Poland by 51%.

There is an even higher level of defence spending in Armenia and Azerbaijan, which have been locked into a usually frozen conflict over the Nagorno-Karabakh enclave for years until it erupted into full scale war this year. The two countries spend close to 4% of GDP on defence and are among the most militarised countries in the world.

The GDI scores each country across five key risk areas — financial, operational, personnel, political, and procurement — with a maximum score of 100.

The average score on TI’s GDI is just 48, but scores vary widely between countries. Azerbaijan’s score of just 15 — the worst in the region — places it in the ‘critical’ risk category, and it scores poorly across all five categories. Montenegro is also judged to be at ‘very high’ risk with a score of 32.

At the other end of the spectrum, Latvia scores 67, indicating a low risk of corruption due to high levels of transparency in defence procurement. It is the only one of the countries in the region to be classed as ‘low risk’.

“While it is encouraging to see a handful of countries score well the overall picture for the region is one of high corruption risk, especially around defence procurement – an area responsible for huge swathes of public spending.”

Looking at specific areas, the report reveals that secret procurement accounted for as much as 70% of total procurement procedures in Poland, 51% in Georgia and 45% in Ukraine.

In otherwise relatively clean Lithuania, open competition accounted for as little as 0.5%, while at least 93% of defence procurement is conducted through restricted tenders and negotiated procedures.