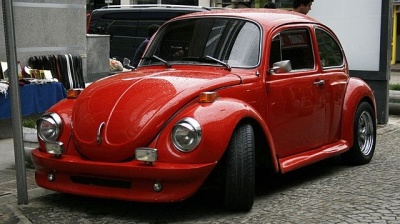 A VW Beetle in Giresun, Turkey. Not a pleasant sight for many Turkish officials right now.
By bne IntelIiNews July 1, 2020

Turkey on July 1 was coming to terms with two big blows dealt by Europe to its fragile economy.

Firstly, Germany’s Volkswagen said the blow to demand caused by the coronavirus (COVID-19) crisis meant a proposal for it to build a $1.4bn auto plant in Turkey—already in doubt given union protests against investing in a country responsible for human rights offences during its incursion into northeast Syria last October—was no longer under consideration. Secondly, the European Union showed no sign of backtracking from a decision to exclude Turkey from a list of countries recommended for non-essential travel amid the pandemic, causing Ankara to tell the bloc to correct the “mistake” as soon as possible.

Volkswagen made it clear it now saw no point in building a new factory in Turkey or in a nearby country, saying that the steep drop in demand for cars worldwide caused by the effects of the coronavirus pandemic meant the manufacturing capacity was no longer needed.

The drafted plan was to build a plant in Manisa on Turkey’s western coast to make Volkswagen Passat models as well as Superb sedans that come under its Czech Skoda brand. The company was envisaging a possible start in 2022 with an annual capacity of 300,000 units, according to The Associated Press.

Turkish President Recep Tayyip Erdogan was so enthusiastic about persuading VW to select Turkey for its manufacturing facility that he ordered officials to buy Passat limousines. But then came the invasion of Syria to pursue Kurdish fighters and Turkey as a location met with opposition from German labour unions.

VW added that the pandemic had pushed market growth expectations far into the future.

The plant was originally intended to supply vehicles that would satisfy what was previously forecast as growing demand in Eastern Europe and the Middle East. VW said it would carry out all its planned vehicle projects with its current factories.

The EU’s exclusion of Turkey from its “safe list” of countries where it can advise non-essential travel is a grievous blow for a country that relies on tourism for something like around 13% of its GDP and is desperate to get its international tourism season rolling this summer given the huge damage already dealt to it by the virus emergency and related lockdowns and restrictions.

Turkish foreign ministry spokesman Hami Aksoy responded in a statement as quoted by Reuters: “The measures Turkey has taken to combat the coronavirus pandemic as well as her efforts and success in this respect are evident. We expect the correction of this mistake regarding the travel restrictions for our citizens as soon as possible.”

However, there have even been doubts expressed by representatives of the top Turkish medics association as to whether Turkey has yet brought its coronavirus outbreak under control. New daily cases of infection are still running at around 1,300—and that’s the official tally, the unofficial picture could be a lot worse say some experts.

Turkish Foreign Minister Mevlut Cavusoglu and Tourism Minister Mehmet Ersoy were set to visit Berlin on July 2 for talks with German officials to discuss the pandemic and tourism among other issues. Germany is a key source of tourists for Turkey.

Earlier on July 1, Erdogan told officials from his AKP party that Europe had maintained “restrictive” policies towards Turkey based on political rather than health factors. He also spent part of the day fiercely criticising foreign social media networks and warning that his administration would bring their platforms under its control or shut them down.