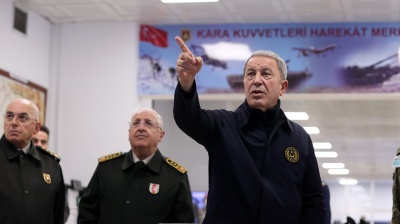 The US defence department said on November 23 that Turkish airstrikes on Syria had "directly threatened the safety of US personnel" working in the country to combat jihadist group Islamic State.

A Turkish drone attack against Syrian Democratic Forces (SDF) commander Mazloum Abdi's main headquarters north of the city of Hassakeh on November 22 endangered US troops, it added. The SDF said the strike killed two of its fighters.

Turkish President Recep Tayyip Erdogan, meanwhile, warned that the four days of airstrikes on Syria and Iraq that had taken place so far were a precursor to a cross-border ground operation against the Syrian Kurdish People's Protection Units (YPG), which provides most of the SDF’s fighters.

The strikes were "only the beginning", said Erdogan. With Turkey in an economic hole, the Turkish leader is widely seen as currently taking any opportunity to burnish his credentials as a strong, nationalist leader ahead of elections he must face within seven months.

Ankara contends that the YPG is a wing of the Kurdistan Workers' Party (PKK)—a group designated as terrorist by Turkey, the EU and US—that has fought an insurgency, demanding autonomy in southeastern Turkey, for decades. A difficulty is that the US has for several years been allied with the YPG to secure the fighters required to crush Islamic State in Syria and Iraq. Washington is wary that moves by Turkey to attack the YPG and secure military goals in Syria could undermine the fight against Islamic State.

On November 13, Turkey was quick to blame Kurdish groups for a bomb attack on Istanbul shopping thoroughfare Istiklal Avenue, which killed six and injured 81.

Both the PKK and YPG, however, denied involvement. The PKK said it would never target civilians.

The SDF subsequently accused Turkey of using the Istanbul bombing as a ‘false flag’ pretext to launch a cross-border offensive.

SDF commander Abdi was reported by Al-Monitor on November 22 as saying that the Istanbul attack was "perpetrated by Syrian opposition groups operating under Turkey's control".

He also said Russia and the US were not doing enough to deter Turkey from launching a ground incursion in Syria. Russia, which unlike Turkey supports Syria’s Damascus regime, also has forces in Syria.

In a speech to members of his Justice and Development Party (AKP) in parliament on November 23, Erdogan said Turkey was more determined than ever to secure its border with Syria by establishing a "security corridor".

"We are continuing the air operation and will come down hard on the terrorists from land at the most convenient time for us," he warned.

Senior Russian negotiator Alexander Lavrentyev said on November 23 that Russia has asked Turkey to refrain from a full-scale ground offensive in Syria, given that it could spark an escalation of violence.

"We hope our arguments will be heard in Ankara and other ways of resolving the problem will be found," Lavrentyev said, following a round of Syria talks with Turkish and Iranian delegations in Kazakhstan.

“Turkey is quite serious about the current Syria offensive,” the Middle East Institute’s and St Lawrence University’s Howard Eissenstat told NatSec Daily. “This fits with both long-standing Turkish assumptions about its security interests and Erdogan’s need to look strong in advance of elections scheduled for June. Under the current circumstances, Russia or the US might be able to impose limits on Turkish actions, but they can’t stop them entirely.”

The Washington Institute for Near East Policy’s Soner Cagaptay remarked to the same publication that “Ankara has just about aligned all-stars for an incursion”.

Some analysts have noted that the US needs Turkey to end its objections to inviting Sweden and Finland into Nato. This, they conclude, will weigh on Washington’s thinking as it assesses how much opposition to put up against Erdogan’s plans to go ahead with a ground offensive in Syria.