Ukraine’s fruit and berry exports expected to boom this year 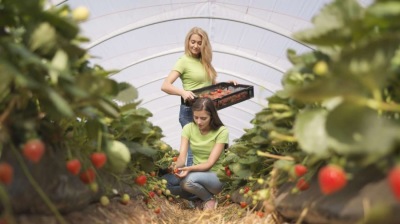 Ukraine already earned $47.4mn from exports of fruit, berries and nuts, in the first two months of 2019
By bne IntelliNews August 13, 2019

Ukraine’s fruit and berry production is flourishing and exports are expected to boom this year, according to Pro-Consulting, Unian reported on August 13.

"Exports of berries from Ukraine significantly exceed imports due to favourable weather conditions for berry crops and a saturated domestic market. This is explained by the fact that most Ukrainian berries are processed as raw materials, which is beneficial to European importers," Pro-Consulting's press service reported, as cited by Unian.

Ukraine already earned $47.4mn from exports of fruit, berries and nuts in the first two months of 2019, Unian reported earlier.

Fruit exports were up 16% by value during the first half of this year y/y, almost keeping pace with last year’s 17% growth, Ukraine’s Agrarian Economic Institute reported earlier this month.

“There is also an interesting segment to produce fruit and vegetables. This has a big potential. Everyone wants to work with the big companies but the fruit and veg business is growing fast and we are targeting them,” Ashot Abrahamyan, chairman of the management board of Bank Lviv, which specialises in working with small and medium-sized enterprises (SMEs), especially in the agricultural sector, told bne IntelliNews in an exclusive interview and podcast.

With another good harvest expected, experts predict that this year will see record levels of exports of fruits and berries on a par with the last record year of exports in 2016.

The berries market still sees high demand for the production of strawberries and raspberries. Ukrainian farmers will be able to further increase exports of fruit and berries to the European Union, provided there is no sharp increase in emigration, which could lead to the loss of the workforce or a rise in labour costs. It will also depend on weather conditions.