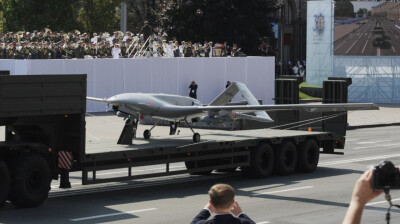 Ukraine displayed its military during the 30th anniversary of independence in a show of strength and defiance of Russian aggression. The Turkish-made TB2 drone is one of the recent additions.
By by Cameron Jones in London August 25, 2021

More than 400 vehicles, 100 aircraft and upwards of 5,000 troops from all the uniformed branches of service were visible during Ukraine’s Independence Day celebrations that were supposed be a source of national pride and a demonstration that the people were ready to defend themselves in the ongoing undeclared war with Russia in Donbas.

Ukraine’s military has been rapidly upgraded since hostilities broke out following Russia’s annexation of Crimea in 2014. Many new and long-awaited weapons that have been recently accepted for service were on display during the parades, although the bulk of the hardware was the same Soviet-era workhorses of the 1970s and 1980s.

Despite being repaired and polished to a sheen, many of the aircraft and armoured vehicles on display are decades old and will have to be retired within the next few years.

Nonetheless, the Interior Ministry unveiled its newest Eurocopter EC225 models, recently purchased from France, in addition to Soviet-era helicopters such as transporters like the Mil Mi-8s and Mi-14s, as well as attack choppers like the Mi-24.

Venerable transport planes like the famous Ukrainian-made Antonov An-26, An-70, An-72 and An-225 Mriya, the largest cargo aircraft ever built, as well as the waterbomber An-32 were in the air, followed by the grand Illiyshyn Il-76, accompanied by jet fighters.

A formation of MiGs painted the sky with blue and gold, the colours of Ukraine’s national banner. The spectacle was, however, tarnished by the knowledge that all those jets are all over 30 years old and have little prospect of being replaced anytime soon.

None of the Ukrainian aircraft on the parade was produced in independent Ukraine. According to Ukraine’s Air Force command, the military air fleet will reach its operational limits over the coming decade and will need to be replaced.

One of the more lethal new additions to Ukraine’s arsenal owes to the increasing military co-operation between Ukraine and its Black Sea neighbour Turkey: the newest Bayraktar TB2 attack drones purchased from Ankara and recently accepted into service were rolled out during the parade. Turkey and Ukraine have reportedly signed an agreement whereby Ukraine will supply propulsion systems for advanced versions of the TB2, manufactured by Ukraine’s world-class engine-maker Motor Sich. In addition, Ukraine may also be producing its own version of the TB2, under licence from Turkey.

Azerbaijan used the Turkish-made TB2 to devastating effect in the recent war with Armenia over Nagorno-Karabakh, which are considered by analysts to be a game-changer in the military balance of power in the region. Moreover, Turkey has promoted itself up the ranks of military powers as the producer of the TB2, as it can trade supply and production of the drones for geopolitical influence in the same way as Russia and the US employ their arms as a tool of diplomacy.

This is the first time since the beginning of the conflict with Russia that Ukraine has had independent control of a primary weapons system, one that has proved effective against both Russian armour and anti-aircraft radar systems in the recent conflicts in both Armenia and Syria.

The Slovakian Air Force also did a fly-by with their Sikorsky UH-60 Black Hawk helicopters and Alenia C-27 Spartan transporter. The Royal Air Force was present on the day with its Eurofighter Typhoon fighters; the UK has recently signed off on a billion dollar deal to upgrade Ukraine’s navy and supply it with several new frigates as well as modernise its Black Sea ports. The celebrations were attended by the UK Defence Minister Ben Wallace to underscore the tighter military ties between Ukraine and the UK. British naval forces had a run-in with the Russian navy last month by sailing through waters claimed by Russia off the Crimea peninsula, where the Russian navy fired warning shots across the bows of a UK destroyer.

On land, modernised T-64B main battle tanks were visible as part of the armoured convoy which was led by three advanced T-84 Oplot machines, including the one that was produced as recently as 2021 as part of a special contract with the Kharkiv Tank Factory.

Then Ukrainian-produced BTR-3 and BTR-4 armoured personnel carriers and their numerous modifications joined the party, followed by armoured cars Kozak-2, Bars-8, Humvees and many more.

The Novator vehicles carried the holy grail of Ukraine’s defence community, the US-provided FGM-148 Javelin anti-tank missile system that it provided Ukraine in 2018. Ukraine was helpless against Russia’s heavy main battle tanks until the tank-busting Javelins were delivered. However, the US has imposed restrictions on the use of the Javelin, which cannot be employed on the front line except in the special circumstance of a full out invasion by Russian forces.

The artillery on display was also impressive. It featured the veteran-heavy 152-millimetre pieces 2A36 Giatsynt-B and 2A65 Msta-B, as well as the country’s main missile weapons, such as the new 300-millimetre Vilkha systems, then the Buk-M1s that are from the same family of Russian-made surface-to-air missiles that brought down the Malaysian commercial flight MH17 in the 2014 tragedy. Ukraine also has the older Russian S-300 missile defence system, which is still considered to be highly effective, but has since been surpassed by the S-400 and Russia is due to release an S-500 version this year.

The parade also produced another long-awaited novelty: the Ukrainian-produced anti-ship missile Neptun that had also been recently accepted for service to defend the nation’s southern coastline. With an effective range of 300 km, the missile is another game-changer in Ukraine’s ability to defend itself.

Meanwhile, on the Dnipro river, Ukraine’s navy demonstrated a group of Gurza-class gunboats and small landing vessels. Investment into the navy has become an important factor in Ukraine’s defence, as after more than a decade’s absence Russia is back as a naval force and in the last 15 years it has pushed to re-establish itself in the Mediterranean, with unexpected success. Naval power off the coast of Ukraine was highlighted after Russian and Ukrainian navies clashed in the Kerch Strait in November 2018, which is the access to the Sea of Azov that is home to several strategically important Ukrainian ports and which was closed off by the Russian navy in a major international incident.

Prior to the war in the country’s east beginning in 2014, Ukraine’s ability to defend itself was severely restricted. It gave up its nuclear weapons in 1994 as part of the Budapest Memorandum in exchange for American and British promises to defend its territorial integrity, while its military industrial complex rotted. Ukraine sold off large chunks of military equipment it inherited from the Soviet Union, such as the S-300s missile systems to Saddam Hussein’s Iraq in the late 1990s and three MiG-29s to Chad in 2014.

After the Russian aggression began then former President Petro Poroshenko upped military spending to 5% of GDP – more than twice Nato’s spending levels – in a rush to modernise Ukraine’s military. Between February and September 2014, Ukraine, mainly on its own, transformed its armed forces from approximately 6,000 combat-ready soldiers to a force capable of nearly re-taking all of Donbas and it also purged its security service ranks of FSB infiltrators. The new military deals between Turkey and Ukraine may prove decisive in Ukraine’s ability to defend itself and are pregnant with the possibility of an offensive drive to retake the territory currently controlled by the Russian-backed separatists in Donbas.

The way the utilities system is designed meant that a whole series of related essentials were quick to fail.

Uzbekistan: How a power outage sent a country into meltdown
5 hours ago
Emerging Europe M&A soars by 55% to €94bn in 2021
1 day ago
Lithuania looks for quality, not quantity in fintech
1 day ago
Who needs a war?
2 days ago
Outbreak of calm grips Ukraine
3 days ago