US flips Security Council the bird on Iran 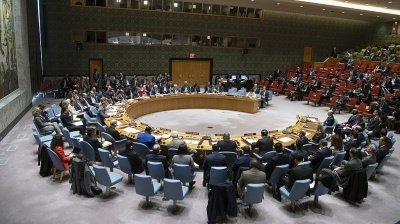 Security Council in session during a nuclear nonproliferation briefing.
By bne IntelIiNews September 20, 2020

The US on September 18 essentially flipped the bird at the United Nations Security Council, unilaterally moving ahead with what it claimed was a legitimate reinstatement of UN sanctions on Iran despite having negligible support from other Council members.

France, Germany and the UK (E3) put out a joint statement the following day, saying any attempt by the US to impose its own sanctions on countries not complying with the UN ones it claimed to have imposed was legally void.

The mounting tension saw the Iranian rial (IRR) fall to an all-time low of 273,000 to the dollar.

The timing of Washington’s aggressive move—amid the US presidential election campaign that culminates with the vote in early November—is clearly key in understanding the reasoning behind it. US President Donald Trump is due to address the UN General Assembly by video link on September 22 and, attempting to rally voters to his side, will no doubt use the Iran controversy as another example of a so-called strong America having to take matters into its own hands.

The White House will claim, moreover, that the snapback of sanctions has validity to the point that the planned incremental lifting of a UN-backed arms embargo on Iran, set to take place from October, is null and void. That may also mean Washington asserting it has the right to interdict Iranian shipping to check for illicit transfers of weapons. Such a scenario has some analysts fearful of a naval clash in the Persian Gulf, with the more alarmed fearing some Trump officials may have an ‘October surprise’ in mind before ballot box day in the US.

Events at the Security Council prompted Iranian Foreign Minister Mohammad Javad Zarif to return to his now well-worn theme that the US is a “bully” and the world neighbourhood must not allow it to get its way. He warned that multiple other countries could expect to get hit with sanctions if the US was allowed to enforce its will.

“The Americans as a rule act as a bully and impose sanctions… The world community should decide how to act towards bullying,” Zarif told Iranian state TV on September 19.

“As they [other countries] will face the same thing tomorrow when America takes the same action towards the Nord Stream [pipeline] project [between Russia and Germany], as well as other projects because a bully will continue to act as a bully if he is allowed to do it once,” Zarif added.

While the Iranian government tried to maintain a measured response to the US move to bring back the UN sanctions—Iranian President Hassan Rouhani said in a televised speect that "America is approaching a certain defeat in its sanctions move... It faced defeat and a negative response from the international community"—there was typically no such moderation from the most powerful branch of the Iranian armed forces, the Islamic Revolutionary Guard Corps (IRGC), which warned the US it has the ability to set “on fire at once” all of the American military bases in the Persian Gulf region.

The head of the IRGC, General Hossein Salami, meanwhile, on September 19 threatened retaliation against everyone who had a role in the January drone strike assassination by the US of Qasem Soleimani, who was not only the de facto head of Iran’s military but also the second most powerful official in the Islamic Republic.

The IRGC's website quoted Salami as saying: “Mr. Trump! Our revenge for martyrdom of our great general is obvious, serious, and real. We will hit those who had direct and indirect roles. You should know that everybody who had role in the event will be hit, and this is a serious message. We do prove everything in practice.”

Trump last week tweeted a warning to Iran about any attempt to revenge Soleimani, saying: “If they hit us in any way, any form, written instructions already done we’re going to hit them 1000 times harder.”

The US moved to reinstate the UN sanctions against Iran on the basis that it was an original signatory of the nuclear deal (formally the Joint Comprehensive Plan of Action, or JCPOA) agreed in late 2015 between Iran and six major powers. But the other signatories—as well as Iran, they are France, Germany, the UK, China and Russia—say that because the US unilaterally walked out of the JCPOA in May 2018, it therefore no longer has any legal right to either declare Iran in breach of the agreement—drawn up to curb Iran’s nuclear programme in return for the lifting of the UN sanctions—or to reimpose sanctions in the name of the UN.

In a joint statement, the E3 said: “The United States of America ceased to be a participant in the JCPOA following their withdrawal from the agreement on 8 May, 2018. Consequently, the notification received from the United States and transmitted to the member states of the [UN] security council, has no legal effect. It follows that any decision or action which would be taken on the basis of this procedure or its outcome have no legal effect.

Josep Borrell, the EU’s top diplomat, said the JCPOA was “a key pillar of the architecture of the world system of non-proliferation of nuclear weapons, and by comprehensively addressing Iran’s nuclear programme, it contributes to regional and global security”.

The UN secretary general, Antonio Guterres, cited the legal uncertainty surrounding the US claim of a sanctions snapback in stating that it was not possible to declare that the UN sanctions had been reimposed.

US Secretary of State Mike Pompeo said on September 19 that the US had reimposed UN sanctions and expected “all UN member states to fully comply with their obligations to implement these measures”. He said he would very soon announce additional measures to strengthen implementation of UN sanctions and hold violators accountable.

Iran claims it is not in breach of the JCPOA since it has continued to give UN weapons inspectors access to its nuclear development programme sites, even though it acknowledges it has been expanding its enriched uranium stockpile above quantities set out in the agreement. The building up of the stockpile is part of a strategy Iran introduced to try and pressure Europe to do more to shield its economy from crushing US sanctions.