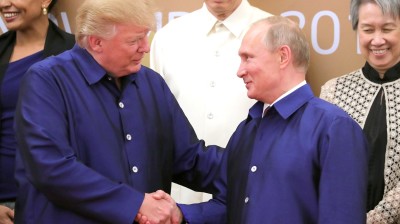 US President Donald Trump says again he intends to invite Russia's Vladimir Putin to the G7 summit this autumn in the US, an idea widely rebuffed by the other members of the club
By Ben Aris in Berlin August 11, 2020

"I certainly would invite him to the meeting. I think he’s an important factor," Trump told a White House briefing on Monday answering a question.

The G7 summit was due to be held at Camp David in June but was postponed to September or November after German Chancellor Angela Merkel said she would not attend due to the coronavirus (COVID-19) pandemic concerns.

Previously Trump suggested that he would also extend an invitation to Putin to the summit, but the idea was vigorously rebuffed by the EU leaders, who said they would boycott the meeting if Putin attended.

Russia was expelled from the G7 following the annexation of the Crimea in 2014. However, the Kremlin has said it is not interested in rejoining the club, as the G20 is more relevant and Russia remains a member of that club where it has many allies, chief among them being China.

Trump also told reporters he was considering holding the G7 summit after the November election. "I’m much more inclined to do it sometime after the election."

According to Trump, the US has not yet formally invited leaders. "We haven’t sent out invitations. We’re talking to them," he said. In a nod to the declining importance of the G7, which is dominated by the industrialised western countries, Trump said that he was thinking of inviting other increasingly important countries such as Australia, India and South Korea, which are also not members of the G7, to the summit.

The G7 is a group of industrialised nations that comprises Canada, France, Germany, Italy, Japan, the United Kingdom and the United States. The group held its first meeting in 1975. The G7 was renamed the G8 in 1997 when Russia joined the club while Boris Yeltsin was president.