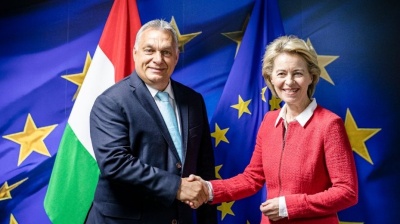 Hungarian Prime Minister Viktor Orban has called for the resignation of the European Commission's Vice-President and Commissioner for Values and Transparency Vera Jourova, for making what he called "inappropriate and unacceptable" statements, in a letter addressed to EC President Ursula von der Leyen.

Comments by the Czech commissioner triggered a new conflict between Budapest and Brussels just days before the European Commission is to release its first report on the rule of law and democracy in member states.

In an interview with Der Spiegel on Friday, Jourova said that the Hungarian prime minister was creating an "ill democracy", a pun on the illiberal democracy established by Orban over the last few years.

She also criticised media freedom in Hungary, saying that the media landscape is "alarming" and that the majority of Hungarians have no room to express their free opinion.

Hungarian Justice Minister Judit Varga condemned the comments on Monday, followed by Hungary's leader, who objected in an unusually harsh tone in a letter to von der Leyen, which according to local analysts opens up a new rift between Hungary and the European Union.

"These statements are not only a direct political attack against the democratically elected government of Hungary that has become commonplace, but also a humiliation to Hungary and the Hungarian people," he said.

Orban argued that Jourova's comments were in contradiction with the Commission's role as a neutral and objective institution enshrined in the Lisbon Treaty.

"They are a blatant violation of the principle of sincere cooperation and prevent any meaningful future dialogue between Hungary and the vice president."

This means that Hungary will suspend all bilateral political contacts with the commissioner.

On Tuesday, European Commission spokeswoman Dana Spinant confirmed that von der Leyen had received Orban's letter and would reply. The EC president has "full trust" in her VP, said Spinant.

The latest scuffle between Hungary and the EU comes at a time when the European Commission is to publish its first report assessing the state of democracy and the rule of law in all EU member states, due out this week. The report has been sent for review, which suggests that the Hungarian government is aware of its content.

The issue of linking the payout of EU funds to rule of law issues is on the agenda on the European Council and will be discussed in the European Parliament as well.

At the July summit, EU leaders agreed on the bloc’s next joint budget for 2021-2027 worth €1 trillion and an additional €750bn economic recovery fund. They set vague conditions on the state of democracy to be eligible for the funds, but exact details have not yet been set down.

The European Parliament has been pushing for tougher conditions than those agreed at the summit. The right-wing governments in Warsaw and Budapest have been threatening to veto any proposal that would threaten their benefits. The two Central European allies have recently announced that they will establish a joint comparative law institute to respond to "the liberal ideological suppression.” The institute would promote debate and transparency within the EU.

Last autumn, the European Parliament approved a report triggering the Article 7 procedure against Hungary which could ultimately strip the country of its EU voting rights. MEPs voted to launch the procedure because of the existence of a clear risk of a serious breach by Hungary of the values on which the union is founded. The European Commission is reviewing whether to launch an infringement procedure against Hungary on the same grounds.

In April after Hungarian parliament approved legislation that allowed Orban to rule by decree without time limit, Jourova said Hungary's emergency measures did not warrant EU scrutiny at that time.

She stressed that the biggest concern about the regulation was that it was not set for a specific time period. In June, Hungary's parliament took back control after the emergency rules were withdrawn.

The EC vice-president is set to take part of an online conference organised by government funded think tank Antall Jozsef Knowledge Centre in cooperation with the Ministry of Foreign Affairs and Trade of Hungary and with the support of the International Visegrad Fund on Friday. Hungary's justice minister will also be part of a panel discussion about the regulation of tech giants.